Cemeteries & the Control of Bodies 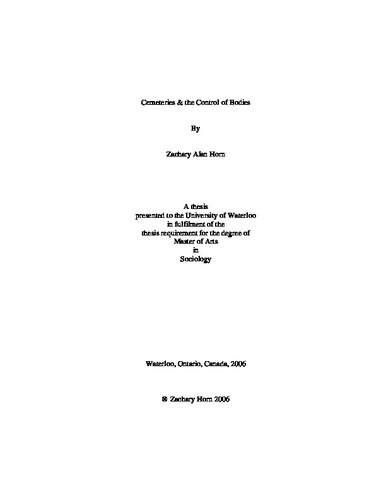 There has been a substantial change in cemetery administration over the last century. Where once cemeteries were predominantly run by religious organizations, now they are mostly run by local municipalities. This thesis examines the change in cemetery administration, using the cemeteries in the city of Hamilton, Ontario as a case study, drawing on material taken from an inventory of Hamilton cemeteries. The Ontario Cemetery Act of 1913 is examined to see how it helped to consolidate municipal power over cemeteries. <br /><br /> In addition to secularization theory, relevant concepts are also applied from the works of Talcott Parsons, Max Weber and Michel Foucault. The analysis suggests that the laicization of cemeteries is part of ongoing rationalizing trends in the larger society. The connection between cemeteries and changes in how we think about human bodies and death is also investigated. Rationalization is linked to a marginalization of the meaning of death as death itself moves from a religious understanding to the control of professionals and bureaucracies like hospitals and funeral homes.