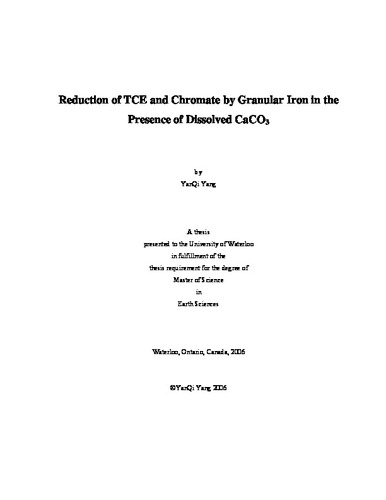 Iron permeable reactive barriers (PRBs) have been installed at sites contaminated with various reducible organic and inorganic chemicals, particularly chlorinated solvents, worldwide. Many geochemical factors can affect the performance of iron PRBs. Chemicals such as nitrate and Cr(VI) may act as competing oxidants when co-exist with chlorinated solvents. Previous studies observed declines in the rate of TCE degradation by granular iron in the presence of nitrate. Passive oxide formation on the iron surface and an increase in corrosion potential of the iron were determined to be the mechanisms for the decline. Cr(VI), being a stronger oxidant than nitrate, may have a similar but greater effect on the iron reactivity. In addition, chromium oxide as well as dissolved CaCO<sub>3</sub>, a common groundwater constituent, form secondary precipitates and are likely to further affect the iron reactivity. The primary objective of this study was to determine the effects of Cr(VI) and dissolved CaCO<sub>3</sub> on the iron reactivity towards TCE and Cr(VI) reduction and to provide mechanistic explanations for the observation. In addition, the applicability of a modified reactive transport model (Jeen, 2005) to the system in which chromate and CaCO<sub>3</sub> co-exist with TCE was evaluated. <br /><br /> Column experiments, including measurements of corrosion potential and surface film composition using Raman spectroscopy were conducted. Five column tests were carried out with input solutions consisting of different combinations of TCE (5 mg/L), Cr(VI) (10 mg/L) and dissolved CaCO<sub>3</sub> (300 mg/L) for eight months. <br /><br /> The results from the column receiving only Cr(VI) showed that Cr(VI) was reduced rapidly by the granular iron and was not detected beyond 10 cm from the influent end of the column by the end of the experiment. However, Cr(VI) profiles migrated from the influent end further into the column overtime, suggesting progressive passivation of the iron near the influent end of the column. The gradual increase in corrosion potential (up to 180 mV positive shift) at the port 3 cm from the inlet with the migration of Cr(VI) profiles suggests the formation and accumulation of higher valent iron oxides, such as hematite and goethite, together with Cr(III) products on the iron surface, passivating iron material. Raman spectroscopic measurements confirmed the presence of passive iron oxides at the end of the experiment. For the column receiving Cr(VI) + TCE, the co-existence of TCE did not affect Cr(VI) reduction kinetics. However, the presence of Cr(VI) affected TCE degradation significantly. Two segments in the migration of TCE profiles are identified: the first segment near the influent end of the column, where the iron was still active towards Cr(VI) reduction but inactive towards TCE degradation, and the second segment where Cr(VI) was fully removed and the TCE degradation continued to follow pseudo-first-order kinetics. The migrations in Cr(VI) and TCE profiles suggest that iron was passivated by Fe(III)/Cr(III) products, and Cr(VI), being a stronger oxidant, was reduced much more rapidly than TCE. It is expected that the first segment of TCE profiles would extend gradually with the migration of Cr(VI) profiles over time. <br /><br /> When dissolved CaCO<sub>3</sub> was added to the columns with Cr(VI) and TCE, either as single contaminant, or as co-contaminants, the pH values near the influent end of the columns remained relatively low (~ pH 7), thus, the presence of dissolved CaCO<sub>3</sub> resulted in a stable corrosion potential and faster degradation rates of TCE and Cr(VI). Over time, however, Cr(VI) reduction and iron corrosion produced OH- and shifted the carbonate-bicarbonate equilibrium, resulting in the precipitation of secondary carbonate minerals, as detected by Raman analysis in the three columns containing CaCO<sub>3</sub>. The precipitation and accumulation of the secondary minerals on the iron surface gradually decreased iron reactivity, as indicated from the progressive migrations of TCE profiles in the column receiving TCE +CaCO<sub>3</sub> and of second segment TCE of profiles in the column receiving TCE + Cr(VI) + CaCO<sub>3</sub>. Over the experimental period, the enhancement of dissolved CaCO<sub>3</sub> was much greater than the iron passivation by secondary mineral precipitates. <br /><br /> Based on the laboratory experiments, Jeen (2005) developed an empirical formula relating the decrease in iron reactivity to the accumulation of secondary minerals, and incorporated this formula into kinetic expression of an existing multi-component reactive transport model (MIN3P). The same code was used in this study to simulate the experimental data. The model reproduced the observations from the columns in which TCE co-exists with Cr(VI) and CaCO<sub>3</sub> quite well, which suggests this model has applicability to predict the long-term performance of an iron PRB when treating groundwater containing Cr(VI), TCE and CaCO3, though there are some potential areas for improvements, including inconsistent volume fractions of secondary carbonate minerals and Fe(III)/Cr(III) products between experimental measurements and model simulation results, the reactive surface area concept, and inability to adapt changes in iron corrosion rates. <br /><br /> The long-term performance for a hypothetical scenario in using an iron PRB (40 cm thick) to treat groundwater where TCE (5 mg/L) co-exists with Cr(VI) (10 mg/L ) in the presence of CaCO3 (300 mg/L) was simulated. The simulation indicated that Cr(VI) was completely treated over a period of 30 years, however, TCE broke through before 20 years, and substantial porosity was lost due to the accumulation of carbonate precipitates. The prediction could be valuable in the design of PRBs or in the development of effective maintenance procedures for PRBs treating groundwater co-contaminated with chromate and TCE.