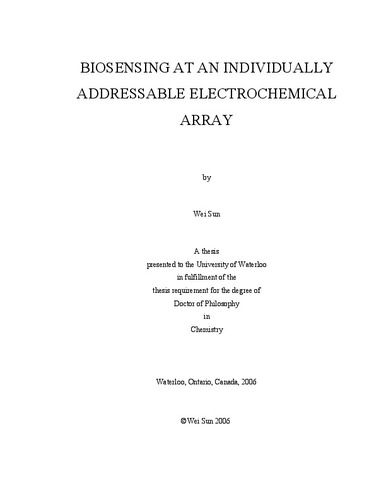 In this thesis, a novel electrochemical array is reported. The array consists of two planar halves, each having four carbon screen-printed band electrodes (SPEs), orthogonally facing each other and separated by a spacer to yield 16 two-electrode electrochemical cells with 1 mm<sup>2</sup> working electrode areas. The 16 counter electrodes were converted to Ag/AgCl by electrodeposition and anodization. These electrodes were stable for at least 30 days with potentials under the current densities used in our experiments. The 16 working electrodes were modified by Au electrodeposition, and were examined by scanning electron microscopy (SEM) and X-ray photoelectron spectroscopy (XPS). <br /><br /> Immobilization strategies for biomolecules are of paramount importance for successful fabrication of biosensors. This thesis reports a new immobilization method that is based on patterned deposition of alkyl thiosulfates (Bunte salts). Monolayers were formed through electrochemical oxidation of Bunte salts at Au-modified electrodes. Single-component and mixed monolayers were investigated, where the mixed monolayers involved one component with a terminal carboxylic acid functional group to allow immobilization of biomolecules. <br /><br /> Applications of the newly developed immobilization method to an enzyme-based biosensor and an immunosensor were investigated. Glucose and biotin were chosen as model analytes, respectively. Glucose oxidase (GOx) and avidin were covalently immobilized onto the mixed-monolayer-modified electrodes through the carboxylic acid groups. Under the optimized conditions for the fabrication and operation of the biosensors, the new electrochemical array showed linearity up to 10 mM glucose with a sensitivity of 4. 7 nA mM<sup>-1</sup> and a detection limit of 0. 8 mM (S/N=3), and linearity up to 12. 8 µM biotin with a detection limit of 0. 08 µM (S/N=3).