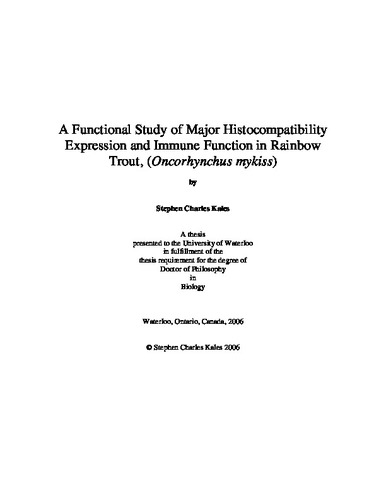 Major Histocompatibility Complex (MHC) receptors serve a critical role in self/non-self recognition through the presentation of peptide antigen to circulating T lymphocytes and are also believed to play a role in mate selection. Through the development of antibodies to MHC homologues in trout, this report demonstrates the presence of MHC expression in germ cells, as well as a soluble form in seminal fluid. What role these immune molecules may perform in reproduction and mate selection is discussed. In addition, as ectotherms, fish are often subjected to low temperatures. Previous data indicates that the expression of these genes is abolished by low temperatures. Employing these same antibodies, this report further demonstrates that trout maintain the expression of MH I and its critical light chain component, beta-2-microglobulin when subjected to 2oC for 10 days. Expression of the MH II receptor sub-units however, was sensitive to both confinement stress and low-temperature in vivo, as well as to factors secreted from a known fungal pathogen in cultured macrophage. As the cause of "winter kill", Saprolegniales cultures induced homotypic aggregation and pro-inflammatory gene expression in the macrophage cell line, RTS11 as well as down-regulation of MH II. Though no evidence of fungal toxins was evident, fungal spore size appeared to exceed macrophage phagocytic capabilities. Taken together, such a loss of MH II expression at low temperature may allow for establishment of fungal and bacterial diseases and that upon the return to warmer temperatures, saprolegniales have the ability to maintain MH II down-regulation and evade immune recognition. Concurrent to the study of MH expression, this report includes the first cloning and characterization of calreticulin (CRT) in fish. Like its mammalian homologue and primary chaperone to MHC receptors and other immune proteins, trout CRT appears to be a single copy gene with ubiquitous tissue distribution, displaying anomalous migration as a doublet with relative molecular mass of 60kD. Despite its promoter containing endoplasmic reticulum stress elements (ERSE), trout CRT expression did not increase upon treatment with several calcium homeostasis antagonists. Treatment of peripheral blood leukocytes with phytohemaglutinin did reveal a qualitative increase in cell surface expression, as seen in mammals; however, cellular protein levels did not change, suggesting that, in trout, CRT function may be regulated through cellular sub-localization, rather than through changes in gene expression, as it is in mammals.