Long- and Short-Term Dynamics of the Wetlands in the Amboseli Savanna Ecosystem, Kenya 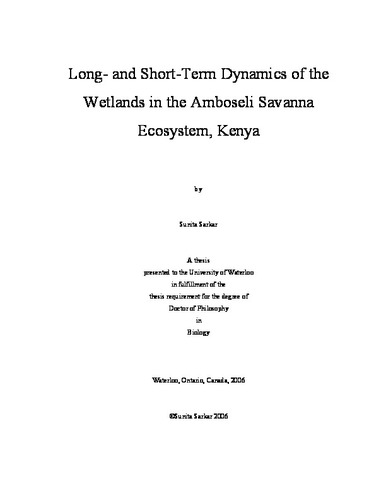 The wetlands of the semi-arid savanna ecosystem of Amboseli are the critical dry-season range for a diverse wildlife population, as well as for livestock and humans. Changes in the migratory patterns and increases in the population of the elephants in the ecosystem, as well as a shift in the lifestyle of the growing human population from predominantly nomadic pastoralist society to a sedentary agrarian community, has had far-reaching effects on the ecosystem and the wetlands. In this thesis, the current status of the wetlands and the changes in vegetation over the last four decades were examined using satellite imagery and long-term census data. Studies were also conducted to determine the impact of grazing by elephants and other large mammals on wetland vegetation, and the flooding patterns and extents of some of the wetlands were examined. <br /><br /> Long-term aerial count data indicated that the wetlands that are currently protected by the Amboseli National Park have been under increasing use year-round by elephants since 1975. These wetlands showed a rapid increase in extent between 1950 and 1976. This corresponds to the elephant-driven decline in <I>Acacia xanthophloea</I> woodlands, which may have changed the hydrology of the area. Since then, only one of the wetlands, Longinye, has shown dynamic changes in extent. This is either the effect of the blockage of water flow by vegetation or the creation of new channels by elephants and hippopotami. The wetlands had a diverse range of wetland habitat from areas of open water with scattered tall <I>Cyperus papyrus</I> communities in the centre of one wetland to large expanses of seasonally inundated <I>C. laevigatus</I> and <I>Cynodon dactylon</I> dominated habitats fringing the wetlands. Most of the wetland habitats were composed of short sedges and grasses, which was shown to be the direct result of elephant grazing. Elephants tended to keep the vegetation of a control wetland short and of low biomass during both wet and dry seasons, whereas the vegetation in a treatment wetland, where elephants were excluded, showed a rapid increase in biomass and height. Other herbivores were shown to maintain conditions of short vegetation of low biomass through grazing pressure in the dry season. The impact of natural and simulated grazing on growth of the vegetation was studied and only under simulated grazing pressure was growth increased in the seasonally inundated <I>C. dactylon</I> grasslands, as well as the floating mat communities dominated by <I>C. laevigatus</I> that occur in the shallow water wetlands. This indicates that natural grazing may be detrimental either to the plants or the soil. <br /><br /> The wetlands that are under human use had predominantly shallow water and seasonal wetland habitat. Deep water habitat with <I>C. papyrus</I> communities was only present in one of these wetlands, Kimana, which is also the only wetland outside the park that is used by livestock and wildlife, as well as to irrigate a large area of land around the wetland. Two other wetlands, Namelok and Lenkir that were predominantly used for irrigated agriculture, were largely composed of seasonally inundated wetland habitat. A fourth wetland, Esoitpus, has been almost completely drained and this has most likely resulted in the development of <I>A. xanthophloea</I> and <I>C. dactylon</I> dominated riverine and <I>C. laevigatus</I> / <I>C. dactylon</I> dominated seasonally inundated wetland communities. <br /><br /> Overall, the wetlands in the park provide a measure of habitat diversity that may be useful for various invertebrate and vertebrate communities. However, the present lack of tall sedges may negatively impact the bird community. This state can be reversed by the exclusion of elephants from some wetlands for short periods of time. On the other hand, the wetlands outside the park appear to be facing rapid draw-down. Hence, there is an urgent need for sound water management practices for these wetlands.