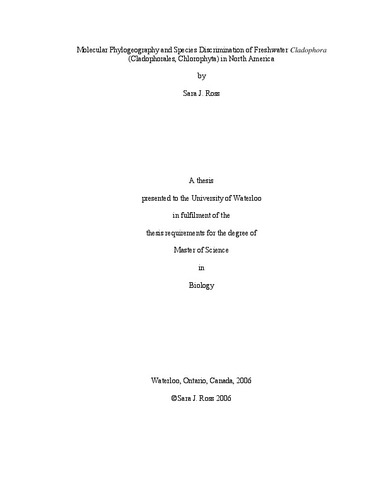 <em>Cladophora</em> is a widespread freshwater filamentous cholorophyte genus and is frequently observed in eutrophic waters where it can produce large nuisance blooms. These blooms can have direct impacts on water intake for power generation, irrigation canals and can be aesthetically unpleasant. Much of the ecological and physiological studies on <em>Cladophora</em> have assumed that the populations of this genus in North America belong to the species <em>Cladophora glomerata</em>. However, this has never been tested despite that it is well documented that identifying freshwater <em>Cladophora</em> to the species level is difficult due morphological variability under different ecological conditions. In addition, the species epithets for freshwater <em>Cladophora</em> are based on European collections and it is not clear if these should be applied to North America. This study examines approximately 40 collections of <em>Cladophora</em> from the Laurentian Great Lakes and 43 from various locations in North America ranging from the Northwest Territories to Puerto Rico. Initially we determined the nucleotide sequences of the internal transcribed spacer (ITS) region of the nuclear ribosomal cistron and observed sequence divergence to be low (0-3%), demonstrating an inability for this marker to resolve species delineation as divergence of this region was low. Amplification of the inter-simple sequence repeat (ISSR) regions were used to analyze microsatellite motif frequency throughout the genome to evaluate the biogeography relationships, including diversity, of freshwater <em>Cladophora</em> sp. five different primers were used on 70 individuals. UPGMA analyses of the presence/absence of bands demonstrate that each of the Great Lake populations separate into groups according to the Lake they were initially sampled from. However, collections from North America are highly variable and do not form well supported biogeographic clades. In addition, these collections appear to be distinct from type cultures of freshwater <em>Cladophora</em> from Europe. Supplementary morphological analysis using suggested taxonomically valid criterion (length and diameter of main axis, ultimate branch, and apical cell) none were able to differentiate Great Lake populations.