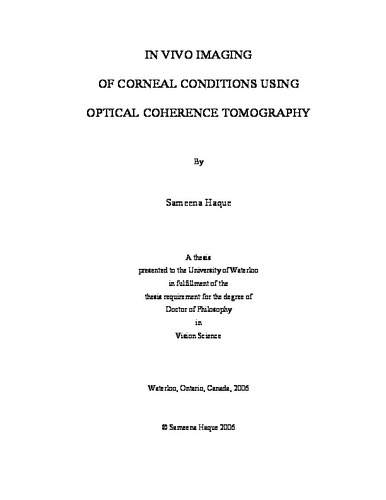 Purposes: To use optical coherence tomography (OCT) to image and quantify the effect of various corneal conditions, in terms of corneal, stromal and epithelial thickness, and light backscatter. To assess the changes caused by overnight orthokeratology (Corneal Refractive Therapy; CRT<sup>TM</sup>) lens wear, keratoconus and laser in-situ keratomileusis (LASIK) refractive surgery, each of which may lead to topographical alterations in corneal thickness either by temporary moulding, degeneration, or permanent laser ablation, respectively. <br /><br /> Methods: Topographical thickness of the cornea was measured using OCT in all studies. The CRT<sup>TM</sup> studies investigated myopic and hyperopic treatment, throughout the day. The myopic studies followed lens wear over a 4 week period, which was extended to 12 months, and investigated the thickness changes produced by two lenses of different oxygen transmissibility. CRT<sup>TM</sup> for hyperopia (CRTH<sup>TM</sup>) was evaluated after a single night of lens wear. <br /><br /> In the investigation of keratoconus, OCT corneal thickness values were compared to those obtained from Orbscan II (ORB) and ultrasound pachymetry (UP). A new fixation device was constructed to aid in the measurement of topographical corneal and epithelial thickness along 8 directions of gaze. Pachymetry maps were produced for the normal non-lens wearing cornea, and compared with the rigid gas permeable (RGP) lens wearing cornea and the keratoconic cornea. <br /><br /> Thickness changes prior to, and following LASIK were measured and monitored throughout six months. Myopic and hyperopic correction was investigated individually, as the laser ablation profiles differ for each type of procedure. The LASIK flap interface was also evaluated by using light backscatter data to monitor healing. <br /><br /> Results: Following immediate lens removal after myopic CRT<sup>TM</sup>, the central cornea swelled less than the periphery, with corneal swelling recovering to baseline levels within 3 hours. The central epithelium decreased and mid-peripheral epithelium increased in thickness, with a more gradual recovery throughout the day. There also seemed to be an adaptation effect on the cornea and epithelium, showing a reduced amount of change by the end of the 4 week study period. The thickness changes did not alter dramatically during the 12 month extended study. In comparing the two lens materials used for myopic CRT<sup>TM</sup> (Dk/t 91 vs. 47), there were differences in stromal swelling, but no differences in the central epithelial thinning caused by lens wear. There was a statistically insignificant asymmetry in mid-peripheral epithelial thickening between eyes, with the lens of lower Dk causing the greater amount of thickening. Hyperopic CRT<sup>TM</sup> produced a greater increase in central stromal and central epithelial thickness than the mid-periphery. Once again, the stroma recovered faster than the epithelium, which remained significantly thicker centrally for at least six hours following lens removal. <br /><br /> Global pachymetry measurements of the normal cornea and epithelium found the periphery to be thicker than the centre. The superior cornea and epithelium was thicker than the inferior. In the measurement of the keratoconic cornea, OCT and ORB correlated well in corneal thickness values. UP measured greater values of corneal thickness. The keratoconic epithelium was thinner than normal, and more so over the apex of the cone than at the centre. The location of the cone was most commonly found in the inferior temporal region. Central epithelial thickness was thinner in keratoconics than in RGP lens wearers, which in turn was thinner than in non-lens wearers. <br /><br /> Following LASIK surgery for both myopia and hyperopia, the topographical OCT thickness profiles showed stromal thinning in the areas of ablation. The central myopic cornea showed slight regression at 6 months. During early recovery, epithelial thickness increased centrally in hyperopes and mid-peripherally in myopes. By the end of the 6 month study, mid-peripheral epithelial thickness was greater than the centre in both groups of subjects. The light backscatter profiles after LASIK showed a greater increase in backscatter on the anterior side of the flap interface (nearer the epithelium), than the posterior side (in the mid-stroma) during healing. The flap interface was difficult to locate in the OCT images at 6 months. <br /><br /> Conclusion: All the CRT<sup>TM</sup> lenses used in this project produced more corneal swelling than that seen normally overnight without lens wear. In order for these lenses to be worn safely for long periods of time without affecting the health of the cornea, they need to be manufactured from the highest oxygen transmissible material available. The long-term effect of thinning on the epithelium's barrier properties needs to be monitored closely. <br /><br /> Global topographical thickness of the cornea and epithelium was measured using OCT in normal, RGP lens wearing and keratoconic eyes. Corneal and epithelial thickness was not symmetrical across meridians. The epithelium of RGP lens wearers was slightly thinner than normal, but not as thin as in keratoconics, suggesting that the epithelial change seen in keratoconus is mainly due to the condition. <br /><br /> Post-LASIK corneal and epithelial thickness profiles were not the same for myopic and hyperopic subjects, since the ablation patterns vary. Epithelial thickening in the mid-periphery had not recovered by six months in myopes or hyperopes, possibly indicating epithelial hyperplasia. Light backscatter profiles were used to monitor the recovery of the LASIK flap interface, showing the band of light backscatter around the flap interface to decrease as the cornea healed.