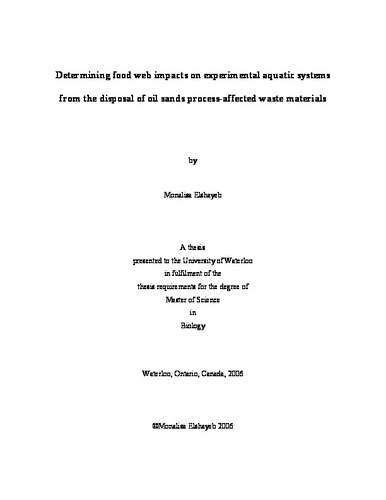 Current mining operators in the Athabasca oil sands deposit of Alberta, Canada have made commitments to zero discharge of oil sands process-affected waste materials (OSPM) from the mine site and rehabilitation of mined lands to a pre-mining state. As part of aquatic reclamation efforts, experimental test sites that contain a range of OSPM (solid and liquid components) were constructed to monitor the evolution and viability of aquatic habitats used as disposal sinks for OSPM produced by mining activities. In the present study, stable isotopes of carbon, nitrogen and sulphur were used to gauge some of the potential effects of OSPM site construction methods on aquatic food webs. Carbon and nitrogen isotopic signatures of sediment, dissolved inorganic carbon, dissolved organic carbon, particulate organic matter, periphytic material, plants, plankton, aquatic invertebrates and fish were used to assess differences related to the naphthenic acid (NA) concentration in OSPM and reference sites. For statistical analyses, sites were grouped into low (0 to 4 mg/L), medium (4 to 15 mg/L) and high (> 15 mg/L) NA concentrations. There were no significant differences in food web area or food web length among the low, medium and high NA concentration sites. In most cases, sample carbon isotope analyses of low, medium and high NA concentration sites were not significantly different, suggesting food web carbon sources did not include significant contributions from OSPM materials at OSPM sites. Significant differences, however, were found in the sample nitrogen isotope signatures between low, medium and high NA concentration sites. Ammonia from OSPM is suggested to be the main contributor to &delta;<sup>15</sup>N enrichment. <br /><br /> To determine the potential effects of site construction and OSPM within experimental test sites, carbon and sulphur stable isotopes of water, plankton, aquatic invertebrates and fish were analyzed. With the exception of <em>Chaoborus</em> and <em>Haliplus</em>, all carbon isotope signatures were not significantly different in constructed and reference sites. Also with the exception of <em>Haliplus</em>, sulphur isotope values for aquatic organisms from constructed and reference sites were significantly different. Aquatic organisms and water samples from constructed sites built in, or close, to the boundary of Kcw clays typically had &delta;<sup>34</sup>S < 0 ?. Coinciding with depleted &delta;<sup>34</sup>S signatures found in these aquatic systems were elevated sulphate concentrations. The waters at experimental test sites are in direct contact with the soil materials that facilitate the accumulation of sulphates as a result of the oxidation of substrate sulphide minerals. In general the results of the study suggest that aquatic food web structure and function do not change with the introduction of OSPM. Shifts in isotopic signatures suggestive of changes in food web structure, however, do occur when site construction exposes Kcw clays in the substrate.