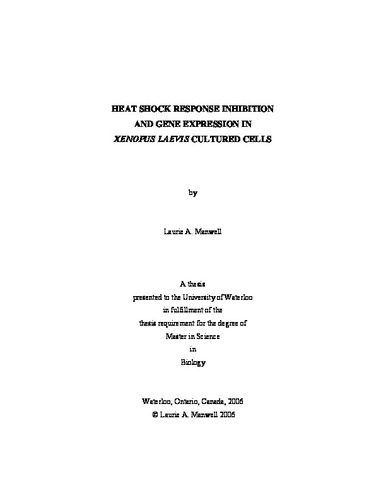 Various genes have evolved to protect the cell against stressor-induced damage or death including the heat shock proteins (HSPs). Stressor-induced HSP gene expression involves the activation of heat shock factor (HSF), which binds to the heat shock element (HSE) found in the promoter region of <em>hsp</em> genes. Previously, our laboratory has examined the expression and function of <em>hsp</em> genes in the South African clawed frog, <em>Xenopus laevis</em>. Amphibians are particularly susceptible to adverse environmental conditions, including high temperatures and toxicants. In contrast to the many known inducers of HSF activation in poikilothermic vertebrates, few inhibitors have been either discovered or described in the literature. The present study has compared for the first time the effect of two heat shock response (HSR) inhibitors, quercetin and KNK437, on <em>hsp</em> gene expression in <em>Xenopus</em> A6 cells, demonstrating their efficacy in poikilotherms. Northern blot and densitometric analysis showed that cells treated with either quercetin or KNK437 decreased the heat shock-induced accumulation of <em>hsp70</em>, <em>hsp47</em>, and <em>hsp30</em> mRNAs. Additionally, constitutive levels of <em>hsp47</em> and <em>hsc70</em> mRNAs were reduced. In comparison, neither quercetin nor KNK437 affected the levels of constitutively expressed <em>ef1&alpha;</em> mRNAs under control or heat shock conditions. Western blot and densitometric analysis in this study showed that under heat shock conditions, exposure to quercetin or KNK437 significantly decreased the accumulation of HSP30, and that KNK437 was more effective in doing so than quercetin. In comparison, levels of actin were not significantly affected by either heat shock or exposure to DMSO, quercetin, or KNK437. These findings suggest that one mechanism by which quercetin and KNK437 inhibits the HSR in <em>Xenopus</em> is through the inhibition of HSF activity. <br /><br /> Results of this study also suggest that KNK437 inhibits the acquisition of thermotolerance in poikilotherms, similar to observations in mammalian systems. In the presence of KNK437, cells given a 2 h heat pretreatment at 33ºC followed by a thermal challenge for 1 h at 37ºC, showed numerous ruffled membrane edges and some aggregates of disrupted stress fibers. In comparison, cells directly challenged for 1 h at 37ºC, showed a marked decrease in HSP30, which was located predominantly at the cellular periphery in conjunction with actin aggregates. These cells showed virtually no intact stress fibers spanning cells and no coherent cell-cell connections. A 3-D analysis of cells given a 1 h thermal challenge at 37ºC (after a prior 2 h heat shock at 33ºC) in the absence of KNK437, showed numerous linear actin bundles transversing the entire cell, even extending into areas of cell-cell contact, and abundant HSP30 concentrated in the perinuclear region surrounding an intact nucleus. However, in the presence of KNK437, there was a significant emergence of membrane ruffles indicating global instability of cellular adhesion. This study has demonstrated that KNK437, which is the more specific and efficient HSR inhibitor, will be an important inhibitor to compare with the well-documented quercetin for future investigations.