The Silurian Amabel and Guelph formations of the Bruce Peninsula: insights into stratigraphy and diagenesis from petrography and ground-penetrating radar 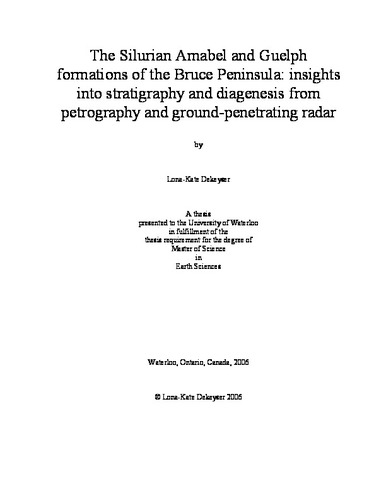 Regional study of the Silurian Amabel and Guelph (including the Eramosa Member) formations in the subsurface on the Bruce Peninsula provides petrographic details of these pervasively dolomitized rocks, defines lithofacies changes within each formation, and demonstrates the use of ground-penetrating radar as a tool for shallow subsurface stratigraphic mapping. Detailed stratigraphic logging of core provides insight on the complex depositional history of the pervasively dolomitized Amabel and Guelph formations by highlighting lateral facies changes that are not readily observable in outcrop. <br /><br /> The Lions Head and Colpoy Bay members of the Amabel Formation are continuous in core across the Bruce Peninsula. These members contain characteristic dark grey mottles which are the result of increased porous zones and pyrite, and/or concentrations of undifferentiated organics. Chert nodules and the abundance of silica is most abundant in the upper Lions Head Member where silica-replaced fossils are recognized within the surrounding dolomite. Typical Wiarton Member crinoidal lithofacies from the upper Amabel Formation are more common in the southern half of the Peninsula. The Eramosa Member is more laterally continuous on the Bruce Peninsula than previously assumed. Although there is a lack of bituminous argillaceous Eramosa lithofacies within core, the laminated Eramosa Member is thick near Wiarton which suggests that a large restricted less-oxygenated area existed in that vicinity during the Silurian. Thick accumulations of tan-brown fossiliferous undifferentiated Guelph Formation dolostones occur at both the northern and southern ends of the Peninsula. <br /><br /> Petrographic analyses reveal that the Amabel and Guelph formations are dolomitized with no precursor limestone observed. Four types of dolomite were observed within these formations and differentiated based on crystal size. These dolomites are characterized by a uniform dull red luminescence, and range from inclusion-rich anhedral very finely (< 5 µm) crystalline dolomite to clearer euhedral coarsely (> 250 µm) crystalline dolomite. Petrographic analyses also revealed secondary minerals such as pyrite, calcite (and dedolomite), silica, sphalerite, fluorite, and glauconite. <br /><br /> Ground-penetrating radar surveys provided high-resolution data, which combined with detailed geologic observations of accessible quarry outcrops and borehole logs, support the conclusion that GPR is a useful tool for locating karstic features, vuggy porosity, and lateral and vertical facies changes in carbonate rocks. Radar profiles may have important implications for the aggregate and building-stone industries as a tool to locate carbonate units of exploration interest or to avoid zones with high impurities.

Lona Kate Dekeyser (2006). The Silurian Amabel and Guelph formations of the Bruce Peninsula: insights into stratigraphy and diagenesis from petrography and ground-penetrating radar. UWSpace. http://hdl.handle.net/10012/2971