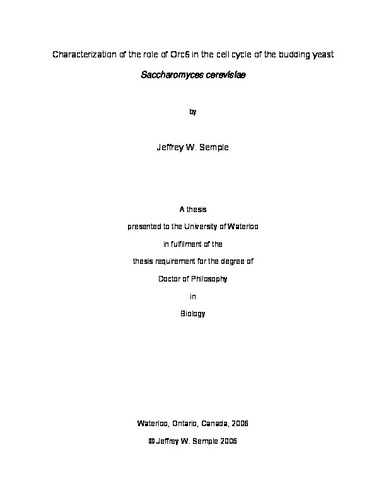 The heterohexameric origin recognition complex (ORC) acts as a scaffold for the G1 phase assembly of pre-replicative complexes. Only the Orc1-5 subunits are required for origin binding in budding yeast, yet Orc6 is an essential protein for cell proliferation. In comparison to other eukaryotic Orc6 proteins, budding yeast Orc6 appears to be quite divergent. Two-hybrid analysis revealed that Orc6 only weakly interacts with other ORC subunits. In this assay Orc6 showed a strong ability to self-associate, although the significance of this dimerization or multimerization remains unclear. Imaging of Orc6-eYFP revealed a punctate sub-nuclear localization pattern throughout the cell cycle, representing the first visualization of replication foci in live budding yeast cells. Orc6 was not detected at the site of division between mother and daughter cells, in contrast to observations from metazoans. An essential role for Orc6 in DNA replication was identified by depleting the protein before and during G1 phase. Surprisingly, Orc6 was required for entry into S phase after pre-replicative complex formation, in contrast to what has been observed for other ORC subunits. When Orc6 was depleted in late G1, Mcm2 and Mcm10 were displaced from chromatin, the efficiency of replication origin firing was severely compromised, and cells failed to progress through S phase. Depletion of Orc6 late in the cell cycle indicated that it was not required for mitosis or cytokinesis. However, Orc6 was shown to be associated with proteins involved in regulating these processes, suggesting that it may act as a signal to mark the completion of DNA replication and allow mitosis to commence.

Jeffrey Semple (2006). Characterization of the role of Orc6 in the cell cycle of the budding yeast <em>Saccharomyces cerevisiae</em>. UWSpace. http://hdl.handle.net/10012/2969