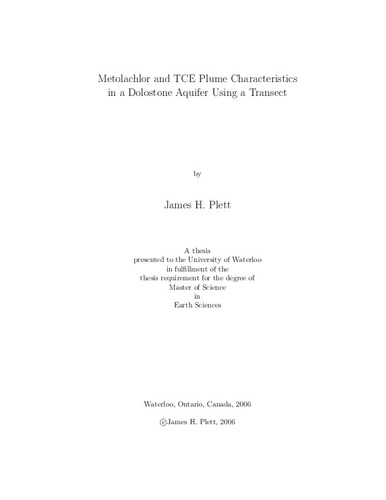 Much is known about natural attenuation of contaminants in granular aquifers because many contaminant plumes in these aquifers have been intensively monitored with detailed sampling along cross sections positioned across the plumes (i. e. transects). However, little is known about natural attenuation of contaminant plumes in fractured rock. In this thesis study, strong natural attenuation of a persistent co-mingled plume of trichloroethylene (TCE) and an herbicide (metolachlor) in a 100 <em>m</em> thick dolostone aquifer used for municipal water supply in Cambridge, Ontario is shown based on detailed delineation of groundwater contaminant concentrations along a single transect located 150 <em>m</em> downgradient from the area where the metolachlor entered the dolostone and 300 <em>m</em> downgradient from the TCE source area. This delineation was accomplished using depth-discrete, multilevel groundwater monitoring systems in five cored holes and detailed analyses of contaminant concentration in rock cores. The maximum metolachlor concentration on the transect is a factor of 20 below the maximum concentration in the metolachlor source area and the maximum TCE concentration on the transect is lower by a factor of 100 from the TCE source area. <br /><br /> Matrix diffusion and strong temporal variability of the groundwater flow system caused by pumping of nearby municipal wells have likely caused strong natural attenuation of metolachlor and TCE and degradation has likely contributed to even stronger TCE attenuation. The transect shows rock core concentrations much higher than the groundwater concentrations in the multilevel systems at the same locations and in the conventional monitoring wells, which indicates that plume persistence is likely maintained by back diffusion from the rock matrix, which has very low hydraulic conductivity but substantial porosity, into the active groundwater flow in the fractures. <br /><br /> Metolachlor has been observed at very low concentrations and has persisted at these concentrations in the nearest municipal pumping well located approximately 780 <em>m</em> downgradient of the transect, however this well shows no detectable TCE. The relatively low concentrations along the transect and the replenishment of the plume by back diffusion suggests that a substantial increase of metolachlor or TCE in the municipal well is unlikely.