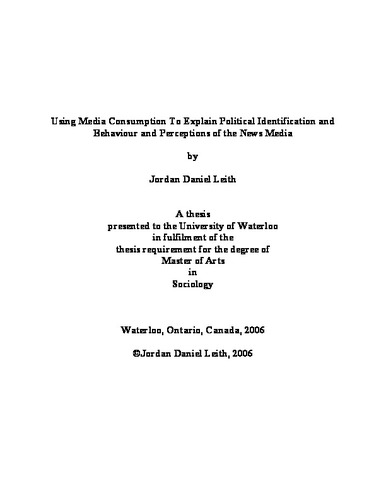 Using secondary data from Pew's Early January 2004 Political Communications Study this thesis explains political identification, the range of media sources that a person uses, perceptions of political party bias and political participation using information about media use and perceptions of the media. The survey, which was conducted during the winter of 2003/2004, includes responses from 1506 individuals. Analytic techniques include means breakdowns, crosstabulations, correlations and multiple regression. Many associations are identified; however, in general, the media related variables were weakly related to dependent variables. The thesis speculates that the weak relationships can be attributed to a homogeneous range of available media content. Connections between the recent growth in the number of media sources and diversity in media content are discussed. The analysis finds that listening to talk radio, religious radio and watching the Fox News Channel were weakly associated with conservatism while use of non-profit media, including use of National Public Radio (NPR), the Cable-Satellite Public Affairs Network (C-SPAN) and the Public Broadcasting Service (PBS) were weakly associated with liberalism. The thesis questions if the use of "sound bites" used on talk radio programs and some 24-hour television news channels is related to the conservatism of these audiences. A positive relationship between the amount of bias that a person sees in the news media and the range of news sources that a person uses was found. Sources include Internet, television and print media. The implications of these findings in the context of the agenda-setting framework and a homogenous media are discussed. Use of the Fox News Channel and talk radio were associated with perceptions of a Democratic Party bias in the news media. Ideas from Bourdieu and Passeron are used to understand how communication styles are related to the perception of talk radio as an alternative to the "liberal media". The implications of the prevalence of the perception of a "liberal media" are discussed and related to theoretical work from Gramsci and Abercrombie. Media that attempt to add diversity through new operational models are described. Associations between political participation and several types of media use were found. The finding that use of comedy television is related to some indicators of political participation is seen as demonstrating the difficulty in distinguishing information from entertainment-oriented programming. The analysis questions assumptions about the relationships between media use, electoral cynicism and political participation. The thesis argues that better tools from examining media use in general and in the Canadian context are needed.