Multiple Substituent Effects on the Rate Constants for N(2)-N(3) Restricted Rotation of cis-1,3-Diphenyltriazenes 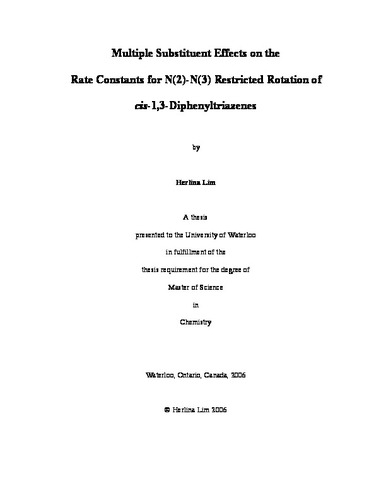 Triazenes represent an interesting class of organic photochromic materials based on cis-trans isomerization around a nitrogen-containing double bond, and of potential use in optical memory devices. One structural property of triazenes related to cis-trans isomerization is restricted rotation around the N(2)-N(3) bond. The purpose of the study presented in this thesis is to investigate the influence of aryl substitution on the N(2)-N(3) rotational barrier of meta and/or para substituted cis-1,3-diphenyltriazenes. Rate constants for restricted rotation in cis-triazenes were measured by means of a laser-flash photolysis system, via trans-to-cis photoisomerization of corresponding trans-triazenes (which were synthesized either by classical or non-classical diazonium coupling reactions). A quantitative structure-reactivity correlation analysis of rate constants for restricted rotation of cis-triazenes was carried out in terms of an extended Hammett equation. Resulting Hammett reaction contants for restricted rotation rotation are -1. 88 ± 0. 08 and 0. 70 ± 0. 08 for N(1) and N(3), respectively, indicating that restricted rotation of cis-triazenes is more sensitive to the electronic character of the aryl group at N(1) than to than at N(3). Interestingly, the observed rate constants for restricted rotation in cyano-containing substrates are found to be pH-dependent. The latter is attributed to a change in the ionization state of the substrate, which is supported by solvent isotope effects. Furthermore, the pH dependence observed for unsymmetrical cyano-containing substrates indicates that upon deprotonation of the amino group, the negative charge concentrates either on the 4-CN substituent attached to the phenyl ring at N(3) or on the triazeno moiety. Thus, the primary cis-anionic 4-cyano-containing forms are not the same ions and do not equilibrate rapidly, since they undergo cis-to-trans isomerization. Finally, an extended Hammett equation was employed in the analysis of pKa values of trans-triazenes. The results show that there is a direct mesomeric interaction between the charge at N(3) in the triazeno moiety with 4-CN and 4-NO<sub>2 </sub>groups in the systerms studied. Consequently, the Yukawa-Tsuno modification of the Hammett equation is introduce to correlate pKa values and Hammett substituent constants