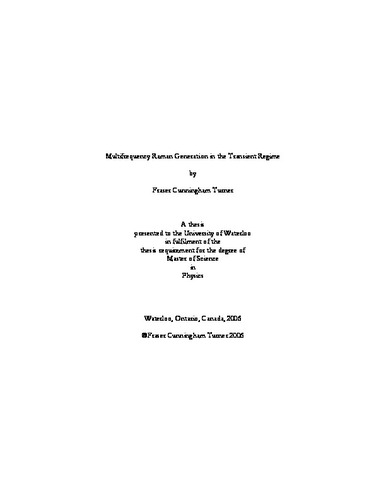 Two colour pumping was used to investigate the short-pulse technique of Multifrequency Raman Generation (MRG) in the transient regime of Raman scattering. In the course of this study we have demonstrated the ability to generate over thirty Raman orders spanning from the infrared to the ultraviolet, investigated the dependence of this generation on the pump intensities and the dispersion characteristics of the hollow-fibre system in which the experiment was conducted, and developed a simple computer model to help understand the exhibited behaviours. These dependence studies have revealed some characteristics that have been previously mentioned in the literature, such as the competition between MRG and self-phase modulation, but have also demonstrated behaviours that are dramatically different than anything reported on the subject. Furthermore, through a simple modification of the experimental apparatus we have demonstrated the ability to scatter a probe pulse into many Raman orders, generating bandwidth comparable to the best pump-probe experiments of MRG. By using a numeric fast Fourier transform, we predict that our spectra can generate pulses as short as 3. 3fs, with energies an order of magnitude larger than pulses of comparable duration that are made using current techniques.