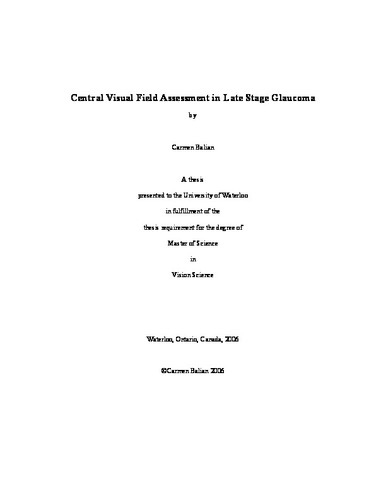 Glaucoma is defined as a progressive optic neuropathy, characterized by loss of visual function and often associated with high intra-ocular pressure. Testing the patients' visual function with Standard Automated Perimetry (SAP) is currently the clinical standard for detecting glaucomatous visual field loss. A new test algorithm using the Frequency Doubling illusion has been introduced on the Matrix perimeter (Humphrey Matrix; Carl Zeiss Meditech, Dublin CA) that measures the central 10° using a 2°x 2° square flickering stimulus. This stimulus has the theoretical advantage of being both a large target, with good repeatability, and being perceptually selective, by preferentially stimulating the magnocellular projecting ganglion cells. <br /><br /> The purpose of this thesis was to determine the within-technique, between-visits repeatability and the within-visit, between-technique comparison of several techniques available to measure the central 10° visual field in patients with late stage glaucoma. In particular, to examine test-retest variability and compare sensitivity threshold values, visual field indices, and total and pattern deviation probability maps among the following techniques: Full Threshold SAP 10-2 size III (SAP III), Full Threshold SAP size V (SAP V), SITA SAP 10-2 size III (SS III), and Matrix 10-2 2° stimulus (M2). <br /><br /> Forty nine patients with advanced glaucomatous visual field defects attended 3 visits. During each visit, 1 eye was examined with each of the 4 techniques mentioned above. Data from the first visit was discarded to eliminate bias that may occur from the learning effect. Coefficient of Repeatability values of SAP III, SAP V, SS III, and M2 were calculated to be 10. 33, 9. 00, 9. 90, and 12. 04%dB respectively, relative to the average difference in threshold estimates between visits. M2 had the most uniform test-retest characteristics across the full range of sensitivities; however the 90% confidence interval was the widest of all techniques in the normal to near normal range (24 to 38dB). M2 showed the greatest defects in both total and pattern deviation probability plots. Threshold estimates of SAP III and SS III were shown to be similar and slightly more variable than SAP V. M2 showed greater defects than SAP III in both total and pattern deviation probability plots. Compared to SAP III and SS, M2 estimated sensitivity as less severe. Estimates of 20 dB and above on M2 were estimated at approximately 30 dB with SAP V. In the moderate to abnormal sensitivity range, Matrix estimated points to be shallower than that estimated by SAP V. <br /><br /> This thesis showed that test-retest variability of the SAP techniques decreased with increasing sensitivity whereas; variability was constant throughout the dynamic range for M2 and smaller in the moderate to severe range. However M2 was worst in the normal to near-normal sensitivity range. This suggests that M2, compared to all SAP techniques, will be disadvantaged for the detection of early visual field loss but better positioned to repeatably detect and follow moderate to severe loss in the central 10° of patients with late stage glaucoma.