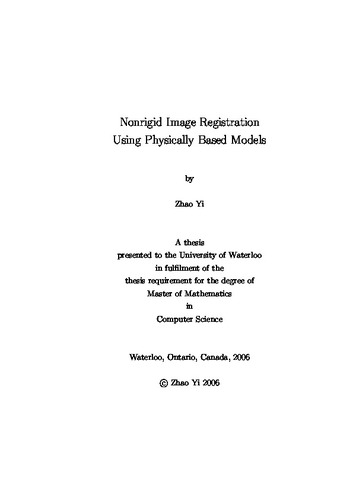 It is well known that biological structures such as human brains, although may contain the same global structures, differ in shape, orientation, and fine structures across individuals and at different times. Such variabilities during registration are usually represented by nonrigid transformations. This research seeks to address this issue by developing physically based models in which transformations are constructed to obey certain physical laws. <br /><br /> In this thesis, a novel registration technique is presented based on the physical behavior of particles. Regarding the image as a particle system without mutual interaction, we simulate the registration process by a set of free particles moving toward the target positions under applied forces. The resulting partial differential equations are a nonlinear hyperbolic system whose solution describes the spatial transformation between the images to be registered. They can be numerically solved using finite difference methods. <br /><br /> This technique extends existing physically based models by completely excluding mutual interaction and highly localizing image deformations. We demonstrate its performance on a variety of images including two-dimensional and three-dimensional, synthetic and clinical data. Deformable images are achieved with sharper edges and clearer texture at less computational cost.