Consolidation and wave propagation in a porous medium 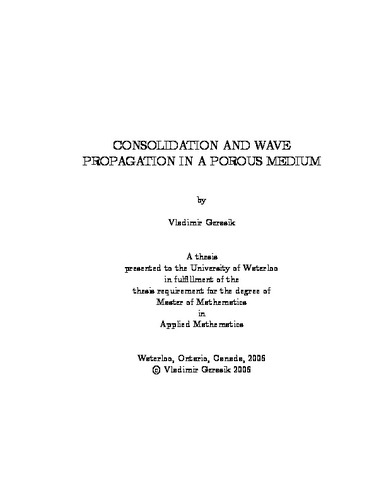 Basic diffusion analytical solutions of one-dimensional consolidation are presented for the case of a semi-infinite domain. Typical tractions considered include instantaneous loads of the medium with a free boundary pressure, as well as the case of a permeable membrane located at the forced boundary. <br /><br /> Two-dimensional boundary value problems for a porous half-space, described by the widely recognized Biot's equations of poroelasticity, including inertia effects is discussed. In this poroelastic version of Lamb's problem in the classical theory of linear elastic waves, the surface of a porous half-space is subjected to a prescribed line traction. The following two broadly applicable cases are considered: 1) A steady state harmonic load, 2) An impulsive load (Dirac delta function time dependence). A general analytical solution of the problem in the Fourier -- Laplace space was obtained by the application of the standard Helmholtz potential decomposition, which reduces the problem to a system of wave equations for three unknown potentials, which correspond to three types of motion: P1, slow P2 wave, and the shear wave S. The possibilities of, and procedure for, obtaining analytic solutions in the physical space subsequently are discussed in detail. When viscous dissipation effects are taken into account, a steady-state harmonic line traction solution can be represented in the form of well convergent integrals, while for the case when viscous dissipation is ignored, closed form analytic solutions can be obtained for impulsive forcing with the application of the Cagniard -- de Hoop inversion technique. Numerical studies of the dispersion relation of the Rayleigh, or surface, wave for cases in which the dissipation is not negligible are presented.