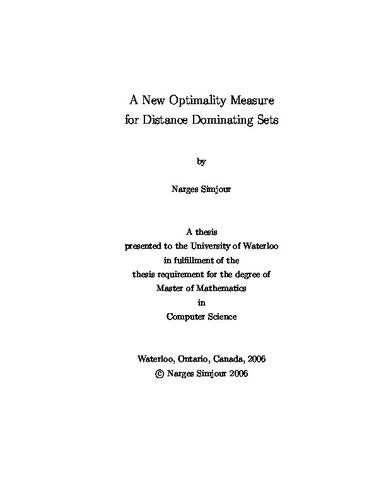 We study the problem of finding the smallest power of an input graph that has <em>k</em> disjoint dominating sets, where the <em>i</em>th power of an input graph <em>G</em> is constructed by adding edges between pairs of vertices in <em>G</em> at distance <em>i</em> or less, and a subset of vertices in a graph <em>G</em> is a dominating set if and only if every vertex in <em>G</em> is adjacent to a vertex in this subset.   The problem is a different view of the <em>d</em>-domatic number problem in which the goal is to find the maximum number of disjoint dominating sets in the <em>d</em>th power of the input graph.   This problem is motivated by applications in multi-facility location and distributed networks. In the facility location framework, for instance, there are <em>k</em> types of services that all clients in different regions of a city should receive. A graph representing the map of regions in the city is given where the nodes of the graph represent regions and neighboring regions are connected by edges. The problem is how to establish facility servers in the city (each region can host at most one server) such that every client in the city can access a facility server in its region or in a region in the neighborhood. Since it may not be possible to find a facility location satisfying this condition, "a region in the neighborhood" required in the question is modified to "a region at the minimum possible distance <em>d</em>".   In this thesis, we study the connection of the above-mentioned problem with similar problems including the domatic number problem and the <em>d</em>-domatic number problem. We show that the problem is NP-complete for any fixed <em>k</em> greater than two even when the input graph is restricted to split graphs, <em>2</em>-connected graphs, or planar bipartite graphs of degree four. In addition, the problem is in P for bounded tree-width graphs, when considering <em>k</em> as a constant, and for strongly chordal graphs, for any <em>k</em>. Then, we provide a slightly simpler proof for a known upper bound for the problem. We also develop an exact (exponential) algorithm for the problem, running in time <em>O</em>(2. 73<sup><em>n</em></sup>). Moreover, we prove that the problem cannot be approximated within ratio smaller than <em>2</em> even for split graphs, <em>2</em>-connected graphs, and planar bipartite graphs of degree four. We propose a greedy <em>3</em>-approximation algorithm for the problem in the general case, and other approximation ratios for permutation graphs, distance-hereditary graphs, cocomparability graphs, dually chordal graphs, and chordal graphs. Finally, we list some directions for future work.