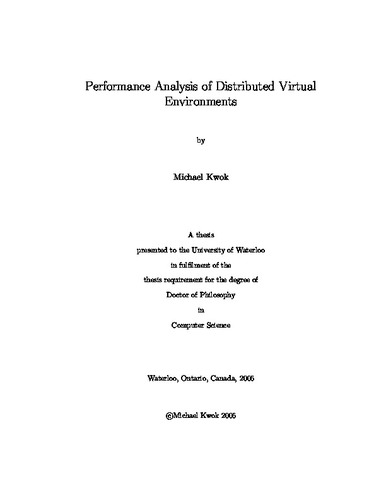 A distributed virtual environment (DVE) is a shared virtual environment where multiple users at their workstations interact with each other. Some of these systems may support a large number of users, e. g. , massive multi-player online games, and these users may be geographically distributed. An important performance measure in a DVE system is the delay for an update of a user's state (e. g. , his position in the virtual environment) to arrive at the workstations of those users who are affected by the update. This update delay often has a stringent requirement (e. g. , less than 100 ms) in order to ensure interactivity among users. <br /><br /> In designing a DVE system, an important issue is how well the system scales as the number of users increases. In terms of scalability, a promising system architecture is a two-level hierarchical architecture. At the lower level, multiple service facilities (or basic systems) are deployed; each basic system interacts with its assigned users. At the higher level, the various basic systems ensure that their copies of the virtual environment are as consistent as possible. Although this architecture is believed to have good properties with respect to scalability, not much is known about its performance characteristics. <br /><br /> This thesis is concerned with the performance characteristics of the two-level hierarchical architecture. We first investigate the issue of scalability. We obtain analytic results on the workload experienced by the various basic systems as a function of the number of users. Our results provide valuable insights into the scalability of the architecture. We also propose a novel technique to achieve weak consistency among copies of the virtual environment at the various basic systems. Simulation results on the consistency/scalability tradeoff are presented. <br /><br /> We next study the update delay in the two-level hierarchical architecture. The update delay has two main components, namely the delay at the basic system (or server delay) and the network delay. For the server delay, we use a network of queues model where each basic system may have one or more processors. We develop an approximation method to obtain results for the distribution of server delay. Comparisons with simulation show that our approximation method yields accurate results. We also measure the time to process an update on an existing online game server. Our approximate results are then used to characterize the 95th-percentile of the server delay, using the measurement data as input. <br /><br /> As to the network delay, we develop a general network model and obtain analytic results for the network delay distribution. Numerical examples are presented to show the conditions under which geographical distribution of basic systems will lead to an improvement in the network delay. We also develop an efficient heuristic algorithm that can be used to determine the best locations for the basic systems in a network.