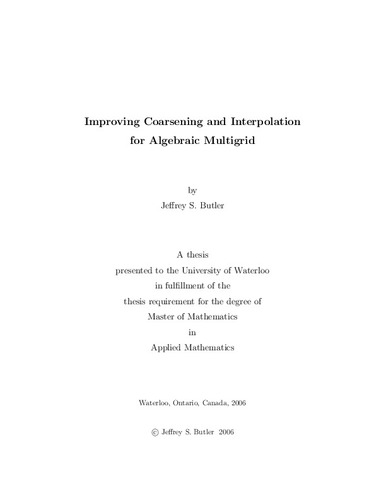 Algebraic multigrid (AMG) is one of the most efficient algorithms for solving large sparse linear systems on unstructured grids. Classical coarsening schemes such as the standard Ruge-St&uuml;ben method [14] can lead to adverse effects on computation time and memory usage that affect scalability. Memory and execution time complexity growth is remedied for various large three-dimensional problems using the parallel modified independent set (PMIS) coarsening strategy developed by De Sterck, Yang, and Heys [18]. However, this coarsening strategy often leads to erratic grids without a regular structure that diminish convergence. <br /><br /> This thesis looks at two modifications of the PMIS algorithm that aim to improve scalability. These include a greedy implementation of PMIS and restricting PMIS coarsening to finer grid levels while Cleary-Jones-Luby-Plassman coarsening (based on the standard Ruge-St&uuml;ben method) is performed on all other grids. It is shown that, for a variety of problems, the greedy PMIS algorithm does little to improve convergence, while the second modification can improve convergence. However, it is also shown that the second modification can result in increased memory usage that is unfavorable to scalability. <br /><br /> The PMIS based algorithm can be improved by redefining interpolation. As shown by De Sterck and Yang [17], PMIS coarsening combined with <em>F-F</em> interpolation dramatically improves convergence, but often has negative effects on computation time per iteration and memory usage that affect scalability. A third modification is proposed that aims to remedy this problem by altering <em>F-F</em> interpolation. The new algorithm is called <em>F-F1</em> interpolation, and is shown to reduce computation time per iteration and memory usage compared to <em>F-F</em> interpolation, while maintaining fast convergence and good scalability, for a variety of problems.