Error-Tolerant Coding and the Genetic Code 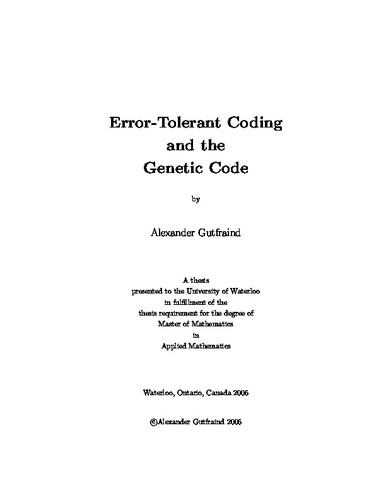 The following thesis is a project in mathematical biology building upon the so-called "error minimization hypothesis" of the genetic code. After introducing the biological context of this hypothesis, I proceed to develop some relevant information-theoretic ideas, with the overall goal of studying the structure of the genetic code. I then apply the newfound understanding to an important question in the debate about the origin of life, namely, the question of the temperatures in which the genetic code, and life in general, underwent their early evolution. <br /><br /> The main advance in this thesis is a set of methods for calculating the primordial evolutionary pressures that shaped the genetic code. These pressures are due to genetic errors, and hence the statistical properties of the errors and of the genome are imprinted in the statistical properties of the code. Thus, by studying the code it is possible to reconstruct, to some extent, the primordial error rates and the composition of the primordial genome. In this way, I find evidence that the fixation of the genetic code occurred in organisms which were not thermophiles.