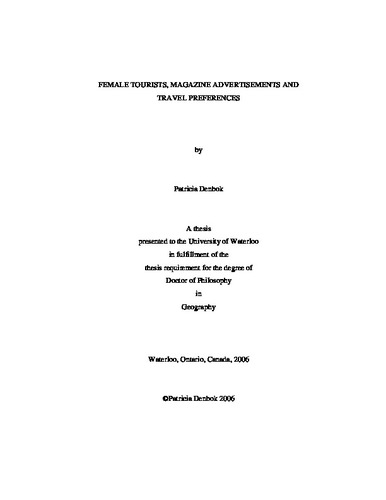 I set out to determine how the contemporary Western female traveler is constructed in popular travel media, and how resonant such images were with female travel consumers themselves. Two periods of ads were compared - 2003-2004, with 1989-1990 - from three widely circulated travel magazines, to gauge any differences discernible over the course of fifteen years with respect to how female tourists are being depicted. Methods included quantitative tabulated comparisons of the gender of travel ad subjects, content analyses of ads featuring female tourists, and participant input from questionnaires and focus groups. The female travel consumers who participated in this study were demographically compatible with the readership of the magazines in which these ads are shown. An intensive interview with one executive at a creative agency responsible for several of the ads was also conducted. <br /><br /> Results indicated that, while representations of female travelers have significantly increased both numerically and relatively to those depicting other sorts of tourists in recent years, this trend does not broadly include more progressive representations of women's increased socio-economic independence and status. <br /><br /> Female travelers are predominantly portrayed in ads as: <ul> <li>Young and attractive</li> <li>Sexualized</li> <li>Passive</li> <li>Sleeping or reclining, seemingly more interested in lying around (decoratively) in a trance-like state and being "pampered" than in actively engaging with their environment. </li></ul> These portrayals were incompatible overall with what female travelers themselves reported they enjoyed doing when they travel, and in terms of what they reported they find resonant in travel advertising. Overall, participants found the travel ads featuring females to be unappealing. <br /><br /> However, there were indications that the ways female travelers are portrayed in ads are slowly evolving to better reflect wider spread female economic independence and autonomy. In particular, a new phenomenon shown in more contemporary ads was the emergence of a "female gaze". This finding coincides with the simultaneous sexualization of female travel ad subjects ? perhaps in reflection of a current post-feminist emphasis on sexual freedom for females. Also noted was an increasing de-emphasis on specific destinations in ads, in favour of a more idealized generic "placelessness. " Female participants in this study did not generally like this trend. There appeared to be some lag in the industry in recognizing that "regular" (i. e. older, average-looking) women are an important source of revenue, in terms of making a larger proportion of travel decisions. Several possible explanations were offered to address this apparent gap between how females in travel ads are being depicted, and the stated likes and preferences of actual female travel consumers who participated in this study. <br /><br /> Female traveler-participants in this study indicated they would very much prefer to see actively engaged, older and realistic-looking female subjects in travel ads, in specific destinations. They noted that travel is a particularly personal form of consumerism, often closely interwoven with one's own sense of personal identity. That result may in part explain the strong negative reactions of many participants to some portrayals in these ads. Tourism-related marketing industries could also do far better in terms of better cultivating the goodwill of female travel consumers, and more successfully attracting their favorable attention.