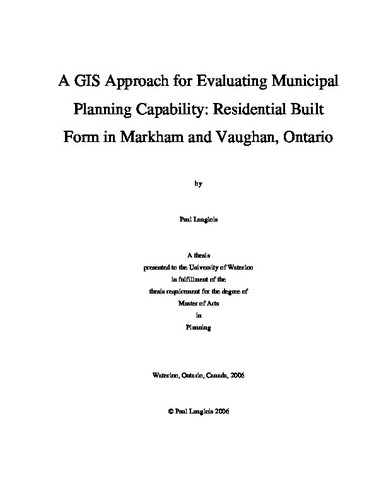 This research describes a methodology for measuring built form patterns using spatial data and GIS that is amenable to the study of large geographical areas. This methodology was used to investigate the capability of municipal planning to influence residential development. In the early 1990s, the Town of Markham, Ontario, Canada adopted a residential development philosophy inspired by New Urbanism. An adjacent municipality, the City of Vaughan, has employed a conventional development approach. By calculating several built form measures derived from the design prescriptions associated with New Urbanism, this study seeks to discern if Markham's adoption of an unconventional development philosophy has resulted in a residential built form distinct from that in Vaughan. <br /><br /> Built form measures are calculated for both municipalities for two eras. Development from 1981 to 1995 represents the "before" or baseline configuration, while development from 1996 to 2003 is used to characterize built form created when Markham's New Urbanist-inspired approach was in force. Period over period comparisons are carried out for each municipality, as are within-period comparisons between municipalities. <br /><br /> Findings indicate that development patterns are distinct in the two study periods. From the early period to the more recent, street networks take on a more grid-like organization while building lots and blocks become smaller. These changes are accompanied by an overall decline in accessibility to amenities. However, development patterns were found to be quite similar in both municipalities in the recent study period, exhibiting differences in degree, not in kind. The findings appear to indicate that planning's influence over residential built form is limited to moderately accelerating positive trends, and moderately retarding negative trends.