Worship in the suburbs: the development experience of recent immigrant religious communities 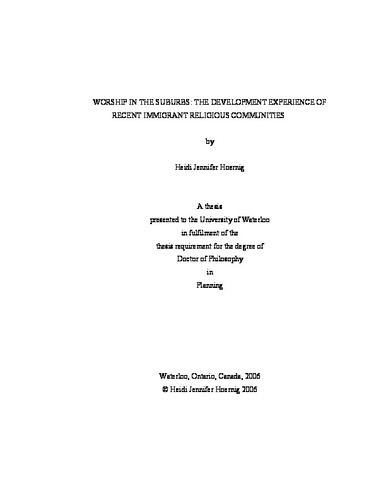 Immigration is transforming large Canadian urban regions. Rapidly increasing religious diversity is one dimension of the dramatic, multicultural shift accompanying this sea-change. Over the past decade, many important questions have emerged concerning urban planning and management amidst ethnoracial diversity. The development of places of worship, key activity centres for many recent immigrant communities, intersects many of these questions. Land use conflict related to place of worship development has been a common feature of much of the empirical, urban literature. <br /><br /> This study explored the development experience of religious communities from five religions: Buddhism, Christianity, Hinduism, Islam and Sikhism, in three suburban communities of the Greater Toronto Area: Mississauga, Brampton and Markham. The key objectives of the study were to compare experiences across minority religious groups in order to explore development issues, to better understand relationships between religion, culture and land use, and to examine municipal planning implications of and responses to religious diversity. <br /><br /> The study findings show that most place of worship development experiences have been characterized by adaptation rather than conflict. The findings reveal involved and nuanced stories about the development process in which many recent immigrant, minority religious communities participate. As such, the study highlights the inter-woven complexities and challenges of establishing these significant religious, cultural and social institutions, difficulties that cannot be easily teased apart to isolate one or two problematic variables. <br /><br /> In this way, the study findings accord with the recent urban literature on difference which argues that urban experiences of difference are simultaneously produced by structuring processes of political-economy and socially constructed by multi-faceted, changing subjects (Bridge & Watson, 2003; Eade & Mele, 2002; Jacobs & Fincher, 1998; Low, 1996). Findings show that minority place of worship development is constrained by suburban form, land use planning policy and land economics. At the same time, these constraints are differentially mediated by the resources and strategies of religious communities. Religion and culture play a role in the needs and experiences of place of worship development, but high or unconventional needs are not necessarily tied to challenging development experiences. <br /><br /> The study recommendations build upon the current normative literature in the broader field of multicultural planning. I argue that the common prescriptions set forward by multicultural planning advocates, such as improved cultural knowledge and communication in policy development and implementation are not sufficient to address the challenges of urban planning and management amidst religious and ethnoracial diversity. The study findings suggest that proponents of multicultural planning need to approach the challenges of diversity strategically, to reconsider points, means and agents of intervention. Study recommendations call for a return to the role of the planning expert, to proactively address key land use planning issues such as transportation planning and land use conflict before problems occur. Such a move would concomitantly benefit all community residents, not only those belonging to religious communities. This is because two of the more challenging dimensions of place of worship development: transportation planning and neighbour relations, are issues common to suburban land use development, regardless of the religion, ethnicity or race of the participants. Recommendations also suggest that multicultural planning must be a collective project, requiring the involvement of many actors, including urban academics, immigrant communities and their advocates, political and community leadership as well as urban practitioners both inside and outside of the municipal planning department.