Attitudes toward Urban Living, Landscape, and Growth at the Dawn of Greater Toronto's Growth Management Era 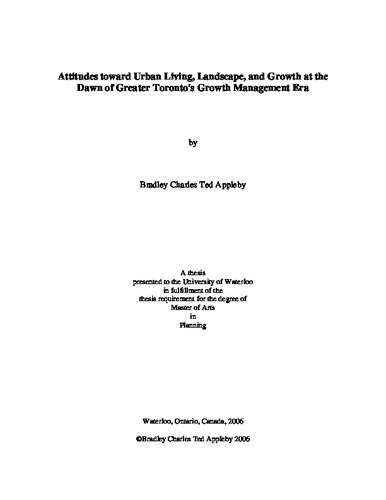 The Greater Toronto Area (GTA) is Canada's largest metropolitan area and principal destination for international migration and investment. Over the next 25 years, the GTA is anticipated to grow by approximately 2. 5 million people to a population of almost 8 million. While many view this growth as a symbol of economic prosperity, others see it as a threat to Toronto's economic, environmental and social well-being due to the dispersed, automobile-oriented way in which the city has accommodated its growth since the 1950s. <br /><br /> Over the last two decades, planners have focused much energy on ameliorating the shortcomings of post World War II urbanization by developing policy measures such as Smart Growth, Growth Management, and New Urbanism that aim to alter the way in which cities are built and thereby effect change in the lifestyles that have precipitated from this landscape. In Ontario, the Provincial Government recently launched a Growth Management campaign for the Toronto area called <em>Places to Grow</em>. Although many have attempted to define this relationship between environment and behaviour, little attention has been given to attitudes, preferences, and behavioural tendencies of those who will be most directly affected by such policies: the general public. <br /><br /> This study surveys residents from six GTA neighbourhoods in order to understand their attitudes and preferences toward urban living and accommodating urban growth and thereby shed light on where support may be found for implementing <em>Places to Grow</em>. Academic literature suggests that residents generally oppose changes to the physical landscape that do not conform to prevailing cultural values and attitudes. The results of this work indicate that people generally support development that is in keeping with the landscape to which they are habituated. Given that most Torontonians live a suburban lifestyle and that most of Toronto's growth occurs in the suburbs, municipalities may be challenged to implement <em>Places to Grow</em> which stands to impact the suburban landscape more than other areas of the region. If <em>Places to Grow</em> is to be successful, planners must have a better understanding of residents' preferences and motivations in order to attract and maintain their interest in community development throughout the entire planning process.