Design and Development of a Power Modulator for Insulation Testing 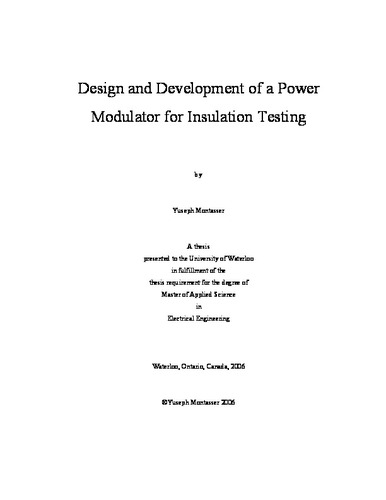 Variable speed drives allow for more precise speed control of induction motors, are of high power factor, and offer fast response characteristics, compared to older technologies, such as motor-generator sets and eddy current clutches. However, due to the high switching frequencies as well as the high dV/dt in the output increased dielectric stresses are produced in the insulation system of the motor they supply. Due to the use of these solid state drives there have been concerns of premature failure in large, medium and high voltage, motors. To fully understand and deal with these concerns requires studying the degradation mechanisms, in the insulation system, caused by these drives; which, on an actual motor is both extremely costly as well as impractical. Therefore, coil samples which accurately represent the construction of the actual insulation system, must be aged and studied instead. In addition, to ideally replicate the aging process, the same waveform that the motor is subjected to must be applied to these samples. As a result of this requirement, a low power, two-level, high voltage PWM inverter has been built to replicate the most important characteristics of the output waveform of a variable speed drive. This power modulator allows for testing the insulation systems considering a real PWM waveform in which both the fast pulses and the fundamental low frequency are included. The results of these tests show that the effects of PWM waveforms cannot be entirely replicated by a unipolar pulse generator.