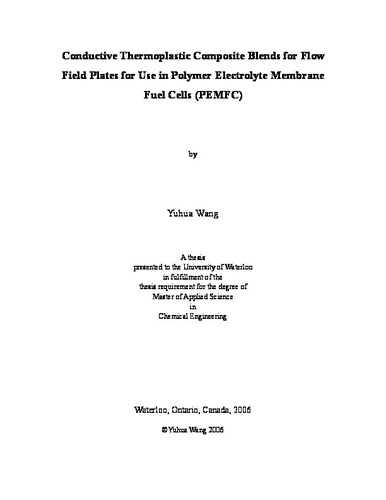 This project is aimed at developing and demonstrating highly conductive, lightweight, and low-cost thermoplastic blends to be used as flow field bipolar plates for polymer electrolyte membrane (PEM) fuel cells. <br><br> The research is focused on designing, prototyping, and testing carbon-filled thermoplastic composites with high electrical conductivity, as well as suitable mechanical and process properties. <br><br> The impact of different types of fillers on the composite blend properties was evaluated, as well as the synergetic effect of mixtures of fill types within a thermoplastic polymer matrix. A number of blends were produced by varying the filler percentages. Composites with loadings up to 65% by weight of graphite, conductive carbon black, and carbon fibers were investigated. Research results show that three-filler composites exhibit better performance than single or two-filler composites. <br><br> Injection and compression molding of the conductive carbon filled polypropylene blend was used to fabricate the bipolar plates. A Thermal Gravimetric Analysis (TGA) was used to determine the actual filler loading of composites. A Scanning Electron Microscope (SEM) technique was use as an effective way to view the microstructure of composite for properties such as edge effects, porosity, and fiber alignment. Density and mechanical properties of conductive thermoplastic composites were also investigated. During this study, it was found that 1:1:1 SG-4012/VCB/CF composites showed better performance than other blends. The highest conductivity, 1900 S/m in in-plane and 156 S/m in through plane conductivity, is obtained with the 65% composite. Mechanical properties such as tensile modulus, tensile strength, flexural modulus and flexural strength for 65% 1:1:1 SG-4012/VCB/CF composite were found to be 584. 3 MPa, 9. 50 MPa, 6. 82 GPa and 47. 7 MPa, respectively, and these mechanical properties were found to meet minimum mechanical property requirements for bipolar plates. The highest density for bipolar plate developed in this project is 1. 33 g/cm³ and is far less than that of graphite bipolar plate. <br><br> A novel technique for metal insert bipolar plate construction was also developed for this project. With a copper sheet insert, the in-plane conductivity of bipolar plate was found to be significantly improved. The performance of composite and copper sheet insert bipolar plates was investigated in a single cell fuel cell. All the composites bipolar plates showed lower performance than the graphite bipolar plate on current-voltage (I-V) polarization curve testing. Although the copper sheet insert bipolar plates were very conductive in in-plane conductivity, there was little improvement in single cell performance compared with the composite bipolar plates. <br><br> This work also investigated the factors affecting bipolar plate resistance measurement, which is important for fuel cell bipolar plate design and material selection. Bipolar plate surface area (S) and surface area over thickness (S/T) ratio was showed to have significant effects on the significance of interfacial contact resistances. At high S/T ratio, the contact resistance was found to be most significant for thermoplastic blends. Other factors such as thickness, material properties, surface geometry and clamping pressure were also found to affect the bipolar plate resistance measurements significantly.