an architecture of daily life: the continuing evolution of Toronto's residential fabric 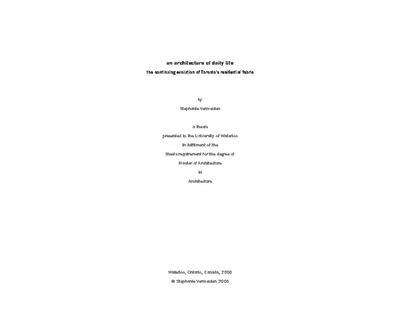 This thesis envisions a new way of living in the city of Toronto. It is a vision that evolves not from the ideologies on which Toronto was founded, set out over 100 years ago when all multi-family dwellings were called tenements and tenements were considered, among other things, immoral. Instead, it is a vision founded on a city that has seen immense change over the last century, and faces an even greater rate of change over the next. Our city prides itself on its cultural and social diversity, yet, architecturally, we still struggle to adapt within a fabric of single-family homes. The Dutch provide an edifying example of an architecture of daily life, embodied by their attitude toward issues of privacy, toward traffic, toward work and play. Based on a case study of housing in the Netherlands, a country that has successfully and creatively adapted to the demands of housing in a climate of rapid immigration and a diversifying population, this thesis proposes new, high density urban housing typologies for the city of Toronto. This new vision for the city serves not only to add the necessary density to our existing neighbourhoods, but to foster a strong community life and to provoke new ideas about urban living.