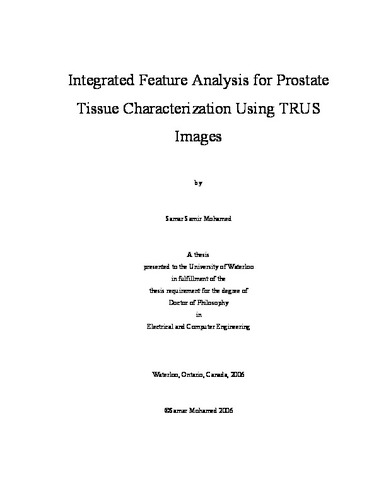 The Prostate is a male gland that is located around the urethra. Prostate Cancer is the second most diagnosed malignancy in men over the age of fifty. Typically, prostate cancer is diagnosed from clinical data, medical images, and biopsy. <br /><br /> Computer Aided Diagnosis (CAD) was introduced to help in the diagnosis in order to assist in the biopsy operations. Usually, CAD is carried out utilizing either the clinical data, using data mining techniques, or using features extracted from either TransRectal UltraSound (TRUS) images or the Radio Frequency (RF) signals. <br /><br /> The challenge is that TRUS images' quality is usually poor compared to either Magnetic Resonance Imaging (MRI) or the Computed Tomography (CT). On the other hand, ultrasound imaging is more convenient because of its simple instrumentation and mobility capability compared to either CT or MRI. Moreover, TRUS is far less expensive and does not need certain settings compared to either MRI or CT. Accordingly; the main motivation of this research is to enhance the outcome of TRUS images by extracting as much information as possible from it. The main objective of this research is to implement a powerful noninvasive CAD tool that integrates all the possible information gathered from the TRUS images in order to mimic the expert radiologist opinion and even go beyond his visual system capabilities, a process that will in turn assist the biopsy operation. In this sense, looking deep in the TRUS images by getting some mathematical measures that characterize the image and are not visible by the radiologist is required to achieve the task of cancer recognition. <br /><br /> This thesis presents several comprehensive algorithms for integrated feature analysis systems for the purpose of prostate tissue classification. The proposed algorithm is composed of several stages, which are: First, the regions that are highly suspicious are selected using the proposed Gabor filter based ROI identification algorithm. <br /><br /> Second, the selected regions are further examined by constructing different novel as well as typical feature sets. The novel constructed feature sets are composed of statistical feature sets, spectral feature sets and model based feature sets. <br /><br /> Next, the constructed features were further analyzed by selecting the best feature subset that identifies the cancereus regions. This task is achieved by proposing different dimensionality reduction methods which can be categorized into: Classifier dependent feature selection (Mutual Information based feature selection), classifier independent feature selection, which is based mainly on tailoring the Artificial life optimization techniques to fit the feature selection problem and Feature Extraction, which transforms the data to a new lower dimension space without any degradation in the information and with no correlation among the transformed lower dimensional features. <br /><br /> Finally, the last proposed fragment in this thesis is the Spectral Clustering algorithm, which is applied to the TRUS images. Spectral Clustering is a novel fast algorithm that can be used in order to obtain a fast initial estimate of the cancer regions. Moreover, it can be used to support the decision obtained by the proposed cancer recognition algorithm. This decision support process is crucial at this stage as the gold standards used in obtaining the results shown in this thesis is mainly the radiologist's markings on the TRUS images. This gold standards is not considered as credible since the radiologist's best accuracy is approximately 65 %. <br /><br /> In conclusion, this thesis introduces different novel complete algorithms for automatic cancerous regions detection in the prostate gland utilizing TRUS images. These proposed algorithms complement each other in which the results obtained using either of the proposed algorithms support each other by resulting in the same classification accuracy, sensitivity and specificity. This result proves the remarkable quality of the constructed features as well as the superiority of the introduced feature selection and feature extraction methods to detect cancerous regions in the prostate gland.