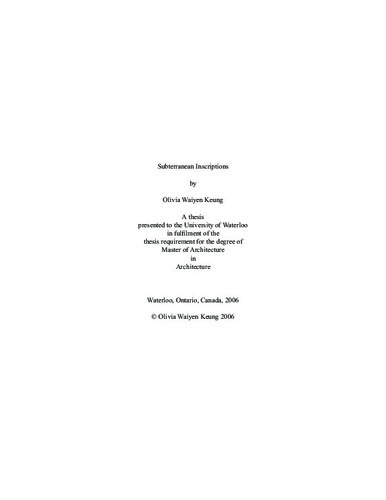 This thesis considers the condition of homelessness through its marginal position against society. Exteriority is often perceived as an abnormal state to be resolved through assimilation. To investigate it in its <em>relationship</em> with the inside, as opposites in a field of interaction, implies a constant state of reaction and change, instead of one that rests in a resolution. The thesis takes this form of continuous shifting between perspectives, media, scale of interaction, and locations, both physical and psychological. Its journey constitutes a search for a middle ground between absolute power and absolute freedom, interiority and exteriority, and an exploration into the possibilities for interaction in this strange and uncertain place. <br /><br /> Through this strategy, the thesis removes the issue of homelessness from the conventional framework of an economical problem, to understand it instead as an existential reality. Homelessness becomes an experience that involves real people and unseen identities; the shifts in the form of this work reflect the subtle idiosyncracies that arise from this subjective reading. In its exteriority, homelessness is related to the psychoanalytical notion of otherness: a quality that is emotional and uncontrolled, and exists outside of social laws. As a threat to public order, this quality is undesireable within society. Thus, the Other is an identity that becomes subjugated and hidden through the exercize of power. The thesis relies on established ideas, including Michel Foucault's exposure of this social repression, R. D. Laing's empathetic perception of ontological insecurity, and Julia Kristeva's essay on abjection, to give context to its ambiguous subject. Set against the tentative narration and notation of lived experiences, they seek to uncover the subjective identity of the Other, and to grasp the significance of his expulsion from the interior. The intention of this work is not to judge, or to implement solutions. Rather, it is passive and receptive, and exists largely in the mere <em>confrontation</em> of this estranged condition. <br /><br /> Out of this confrontation, the voices that were buried begin to emerge and assert themselves. Narrative, criticism, design, and visual essay become the vehicles that convey these voices and the multiplicity of their existential experiences, forming a reality from that which was previously invisible to the objective city. This mapping is a construction of displaced identities. The synthesis of these elements exposes the grounds for the possibility of new connections between individuals.