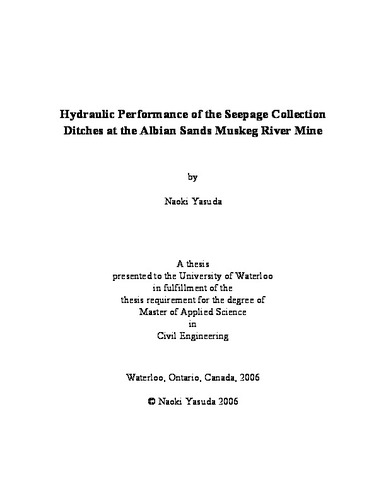 The tailings pond at the Muskeg River Mine is a large structure with a 11 km-long ring dyke that contains process affected water (PAW) and tailings sand. The dyke is made of permeable tailings sand and therefore it is equipped with seepage collection ditches that are designed to collect water from drains in the dyke but also to intercept seepage water not collected by the drains and transmit it to the seepage pond for recycling. The effectiveness of this seepage collection system was examined at the downgradient end of the tailings pond (Study Area) where near-surface permeable sand is present. <br /><br /> Piezometric level measurements were performed and water samples were collected from a network of 21 piezometers and drive points, and at several other critical locations. Concentrations of major chemical tracers of PAW such as naphthenic acids (NAs) show signs of migration of PAW in the permeable sand deposit, beyond the dyke. This interpretation is supported by stable O and H isotope analysis of water. The interpretation of the piezometric and chemical data revealed that the PAW has migrated past the Inner Ditch but not beyond the Outer Ditch. Elevated hydraulic heads beyond the Outer Ditch prevented further migration. Groundwater locally converges and discharges as surface water in the wet area between the two ditches. Thus, the collection ditch system is currently working effectively to contain PAW. <br /><br /> Numerical modeling of the Study Area was able to reasonably recreate the observed hydraulic conditions. Based on these simulations, it is possible that PAW may be migrating through a permeable layer of sand under the bottom of the dyke and pond, and eventually discharging into the wet area between the ditches. The estimated amount of PAW seepage discharged into the wet area is small compared to the total dyke drainage collected by the ditches. <br /><br /> These conditions described above, however, may change with the progress of the current dyke expansion work. The wet area between the ditches will be buried and the local hydraulic condition is expected to alter. This may reverse the hydraulic gradient across the Outer Ditch and perhaps will facilitate migration of PAW beyond the Outer Ditch. It is recommended that the following key chemical parameters be used in future groundwater quality monitoring efforts to track PAW migration at the Muskeg River Mine: Na<sup>+</sup> Cl<sup>-</sup> , SO<sub>4</sub><sup>2-</sup> , and Ca<sup>2+</sup> ions, stable isotopes of hydrogen and oxygen, and Naphthenic acids (NAs. )