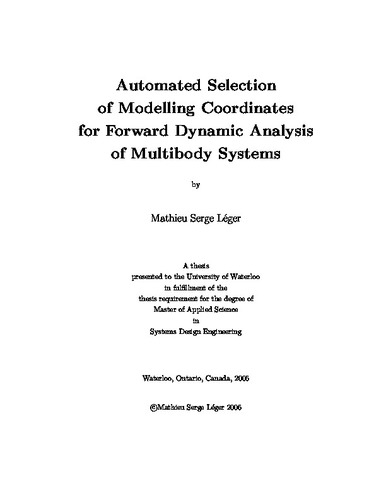 Modelling mechanical systems using symbolic equations can provide many advantages over the more widely-used numerical methods of modelling these systems. The use of symbolic equations produces more efficient models, which can be used for many purposes such as real-time simulation and control. However, the number, complexity, and computational efficiency of these equations is highly dependent on which coordinate set was used to model the system. One method of modelling a mechanism's topology and formulating its symbolic equations is to model the system using a graph-theoretical approach. This approach models mechanisms using a linear graph, from which spanning trees can be used to define a mechanism's coordinate set. This report develops two tree selection algorithms capable of estimating the tree set, and hence coordinate set, that produces models having the fastest forward dynamic simulation times. The first tree selection algorithm is a heuristic-based algorithm that tries to find the coordinate set containing the minimal possible number of modelling variables. Most of this algorithm's heuristics are based on tree selection criteria found in the literature and on observations of a series of benchmark problems. It uses the topology information provided by a system's graph to find the coordinates set for the given system that produce very low simulation times of the system. The second tree selection algorithm developed in this report also uses graph theory. It bases most of its heuristics on observations of one of the methods developed to obtain a mechanical system's symbolic equations using graph theory. This second algorithm also makes use of, and improves upon, a few of the heuristics developed in the first tree selection algorithm. A series of examples for both algorithms will demonstrate the computational efficiency obtained by using the modelling variables found by the automated tree selection algorithms that are proposed in this report.