Design and Analysis of Low-power SRAMs 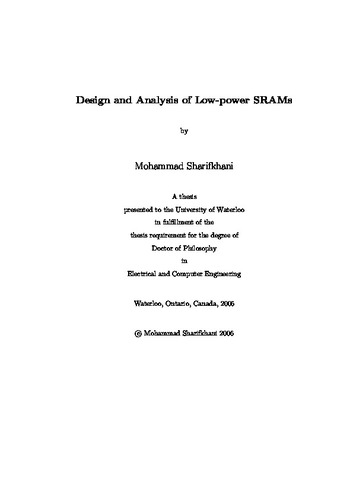 The explosive growth of battery operated devices has made low-power design a priority in recent years. Moreover, embedded SRAM units have become an important block in modern SoCs. The increasing number of transistor count in the SRAM units and the surging leakage current of the MOS transistors in the scaled technologies have made the SRAM unit a power hungry block from both dynamic and static perspectives. Owing to high bitline voltage swing during write operation, the write power consumption is dominated the dynamic power consumption. The static power consumption is mainly due to the leakage current associated with the SRAM cells distributed in the array. Moreover, as supply voltage decreases to tackle the power consumption, the data stability of the SRAM cells have become a major concern in recent years. <br /><br /> To reduce the write power consumption, several schemes such as row based sense amplifying cell (SAC) and hierarchical bitline sense amplification (HBLSA) have been proposed. However, these schemes impose architectural limitations on the design in terms of the number of words on a row. Beside, the effectiveness of these methods is limited to the dynamic power consumption. Conventionally, reduction of the cell supply voltage and exploiting the body effect has been suggested to reduce the cell leakage current. However, variation of the supply voltage of the cell associates with a higher dynamic power consumption and reduced cell data stability. Conventionally qualified by Static Noise Margin (SNM), the ability of the cell to retain the data is reduced under a lower supply voltage conditions. <br /><br /> In this thesis, we revisit the concept of data stability from the dynamic perspective. A new criteria for the data stability of the SRAM cell is defined. The new criteria suggests that the access time and non-access time (recovery time) of the cell can influence the data stability in a SRAM cell. The speed vs. stability trade-off opens new opportunities for aggressive power reduction for low-power applications. Experimental results of a test chip implemented in a 130 <em>nm</em> CMOS technology confirmed the concept and opened a ground for introduction of a new operational mode for the SRAM cells. <br /><br /> We introduced a new architecture; Segmented Virtual Grounding (SVGND) to reduce the dynamic and static power reduction in SRAM units at the same time. Thanks to the new concept for the data stability in SRAM cells, we introduced the new operational mode of Accessed Retention Mode (AR-Mode) to the SRAM cell. In this mode, the accessed SRAM cell can retain the data, however, it does not discharge the bitline. The new architecture outperforms the recently reported low-power schemes in terms of dynamic power consumption, thanks to the exclusive discharge of the bitline and the cell virtual ground. In addition, the architecture reduces the leakage current significantly since it uses the back body biasing in both load and drive transistors. <br /><br /> A 40Kb SRAM unit based on SVGND architecture is implemented in a 130 <em>nm</em> CMOS technology. Experimental results exhibit a remarkable static and dynamic power reduction compared to the conventional and previously reported low-power schemes as expect from the simulation results.