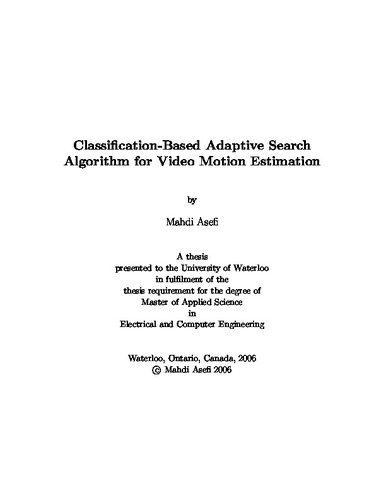 A video sequence consists of a series of frames. In order to compress the video for efficient storage and transmission, the temporal redundancy among adjacent frames must be exploited. A frame is selected as reference frame and subsequent frames are predicted from the reference frame using a technique known as motion estimation. Real videos contain a mixture of motions with slow and fast contents. Among block matching motion estimation algorithms, the full search algorithm is known for its superiority in the performance over other matching techniques. However, this method is computationally very extensive. Several fast block matching algorithms (FBMAs) have been proposed in the literature with the aim to reduce computational costs while maintaining desired quality performance, but all these methods are considered to be sub-optimal. No fixed fast block matching algorithm can effi- ciently remove temporal redundancy of video sequences with wide motion contents. Adaptive fast block matching algorithm, called classification based adaptive search (CBAS) has been proposed. A Bayes classifier is applied to classify the motions into slow and fast categories. Accordingly, appropriate search strategy is applied for each class. The algorithm switches between different search patterns according to the content of motions within video frames. The proposed technique outperforms conventional stand-alone fast block matching methods in terms of both peak signal to noise ratio (PSNR) and computational complexity. In addition, a new hierarchical method for detecting and classifying shot boundaries in video sequences is proposed which is based on information theoretic classification (ITC). ITC relies on likelihood of class label transmission of a data point to the data points in its vicinity. ITC focuses on maximizing the global transmission of true class labels and classify the frames into classes of cuts and non-cuts. Applying the same rule, the non-cut frames are also classified into two categories of arbitrary shot frames and gradual transition frames. CBAS is applied on the proposed shot detection method to handle camera or object motions. Experimental evidence demonstrates that our method can detect shot breaks with high accuracy.