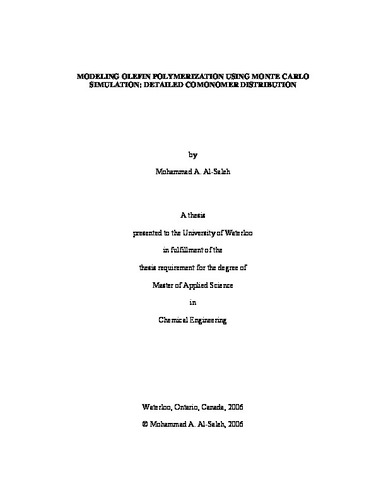 In recent years there have been many efforts to develop and expand the ability of mathematical models capable of describing polymerization systems. Models can provide a key competitive advantage for the industry and research in terms of production and technology development. As new resins are continuously produced to meet the requirement of final applications and processability, it is imperative to pursue strong polymer characterization with special attention to detailed analysis of polymer microstructure. The microstructure of polyolefin is defined by its distribution of molecular weight, chemical composition, branching topology, and stereoregularity. <br /><br /> In this work, a Monte Carlo simulation model was developed to describe the polymerization mechanisms of olefin homopolymerization and copolymerization using single-site coordination catalyst. The mathematical model is meant to describe molecular weight and chemical composition distribution in copolymerization system. More specifically, this research work gives a detailed study of the molecular structure for ethylene- alfa-olefin copolymer. <br /><br /> The chemical and physical properties of copolymers are influenced not only by their average composition, but also by the monomer sequence distribution along the polymer chains. Predicting the molecular weight and comonomer distributions can lead to a better understanding of the possible morphology in solid stated because they are considered to be the main structural parameters that affect the crystallinity of polymeric materials. As a consequence, final physical properties such as the tensile properties of a copolymer could be controlled by the ratio of crystalline species in the polymer. <br /><br /> This work is considered to be a useful tool that enables us to understand and explore specific polymerization catalytic system. Being able to describe the short chain branching and the monomer sequence distribution as a function of chain length enables us to have a better control over semi-batch polymerization reactors.