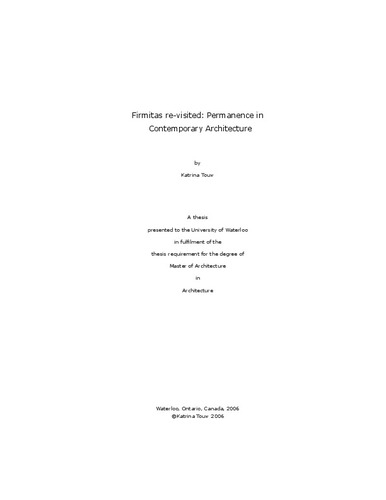 This thesis proposes that the concept 'permanence' is relevant at the beginning of the twenty first century. It examines why the term, while perhaps pertinent in addressing the disposability of architecture in Western society, seems anachronistic. The study reviews the seeming inaccessibility of the term in its contested and plural interpretations, and reviews problems in its definition and relevance. <br /><br /> A close examination of definitions, interpretations and contemporary approaches is provided in order to create a conceptual framework that reveals complex implications of the term. Four strategies for understanding the concept are offered: 'realms versus modes', definitions, a distillation of four positions relating to permanence, and an inquiry into contemporary issues relating to the concept. 'Absolute' and 'relative' realms illuminate a scope for permanence, and 'static' and 'dynamic' modes are discussed. A series of definitions are reviewed that reveal nuance in implications. An analysis of four essays on permanence is included, one from the beginning of the twentieth century and three from the end. This section reveals a series of conflicts relating to the way contemporary Western society uses and understands the term. <br /><br /> Permanence within architecture is widely associated with the Vitruvian definition of <em>firmitas</em>: mass and solidity crafted to endure eternally. Vitruvius' employment of 'permanence' is used as a grounding definition and a fundamental reference for the term's evolution into contemporary usage. In observing the endurance of the original Vitruvian term today, a disconnect becomes evident: absolutism in a society defined by relativity. This thesis argues for the critical significance of the term at a pivotal point in history in addressing the problem of disposable architecture on both a cultural and ecological level. Final open-ended questions are raised that consider staggering construction and demolition waste statistics, implying that permanence could play a significant role in effective responses to a global environmental crisis.