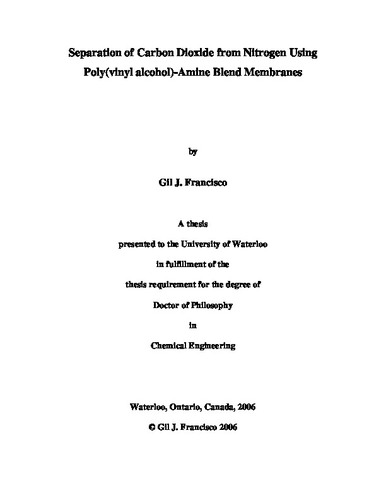 Abstract In this research, a facilitated transport membrane was developed. The reactive membrane consisted of a carrier entrapped in poly(vinyl alcohol) "PVA" matrix cast on a polysulfone support. PVA was selected to hold the reactive carrier because of its hydrophilicity and compatibility with the carrier. Several reactive amines were examined for their suitability as carrier. Among the amines tested as a carrier for CO<sub>2</sub>, diethanolamine "DEA" demonstrates a greater improvement in the permeation of CO<sub>2</sub> as well as selectivity over N<sub>2</sub>. DEA is a secondary amine and one of the most commonly used amines for gas treating due to its favourable reaction kinetics with acid gases and because of its stability when regenerated. Initially, pure gas permeation was employed for materials selection and membrane preparation procedures. The effects of process conditions on the membrane performance, which involve carrier concentrations, feed pressures and operating temperatures were examined. Then the effects of membrane thickness and long-term stability tests were conducted. Once the appropriate membrane materials and preparation procedures were established, the next phase of the study involved the determination of the actual separation of CO<sub>2</sub>/N<sub>2</sub> mixtures. These experiments were carried out by adjusting the feed gas composition, feed pressures and operating temperature. In general, the results obtained with CO<sub>2</sub>/N<sub>2</sub> mixtures were in agreement with those obtained with pure gas permeation experiments. It was found that facilitation is more significant at lower CO<sub>2</sub> partial pressure differential across the membrane. At higher partial pressure differentials, the reactive membrane may no longer serve as a facilitating medium due to the saturation of the reactive part of the membrane. Under such conditions the permeance values and selectivity obtained were simply due to the solubility and diffusivity of the CO<sub>2</sub> and N<sub>2</sub> in the membrane matrix. Since it was not possible to analyze concentration profiles inside the thin membrane experimentally, it was decided to analyze the effects of various parameters through the analytical transport equations. The zwitterion mechanism was used to illustrate the kinetics of the CO<sub>2</sub>-DEA systems. The mass transport equations were solved numerically. All relevant physicochemical properties needed to implement the mass transport equations were taken from the literatures. The calculated results support the experimental trends that were observed for the CO<sub>2</sub> permeance as a function of partial pressure differentials and carrier concentrations.