São Paulo: An Ecological View Of A Theatre For Modernity 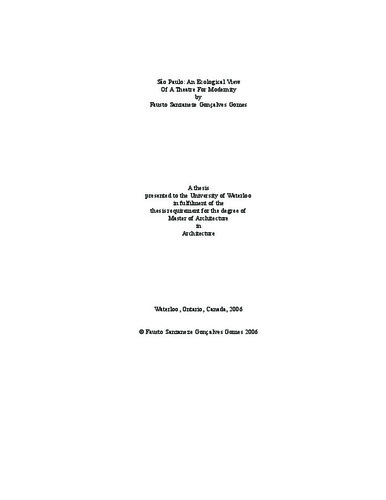 Future challenges for human civilization, especially in the developing world, will increasingly be characterized by both an urban and global condition. What will be the response by design in the face of the implications of this unprecedented scale of development? The thesis is a speculative analysis of the essential nature of the phenomenon of the global mega-city, and is a necessary first step in creating a framework to answer this question. The Brazilian city of São Paulo is chosen as this thesis case study because it is a 'matured' version of this Modern urban phenomenon. Underlying and guiding the creation of this picture of the mega-city is the assertion that the fundamantal nature of the phenomenon of São Paulo is essentially an ecological one. Like any other ecological analysis, the first stage of the inquiry is to identify the motivating force that orders the system and propels the change of the urban ecology. In the case of São Paulo, the thesis develope a picture of an urban agglomeration that has been driven by the unrestrained forces of the aspirations of global Modernism and the exploitation of growing urban multitudes by the personal avarice of capitalism. São Paulo is seen as an urban experiment that rests in the tacit gamble that the economic aspirations underlying São Paulo are limitless in the face of the obvious limits of the city' and globe's biosphere. This relationship between urban organism and host ecology is characterized as parasitic and like the economic and social propelling forces of Modernity, forms the fundamental underlying relationships of the ecology of São Paulo. These relationships in juxtaposition with the propellant force of Modernism, form the sketch of a framework that the thesis proposes for a responsible position for design in the mega-city. In light of this ecological sketch of São Paulo, the underlying perpective for design in the mega-city seeks to strike a balance between economy, ecology and should be founded on a view of the city as an investment that can be evaluated for its performance in providing the context for human flourishing in relations to its use of natural resources.