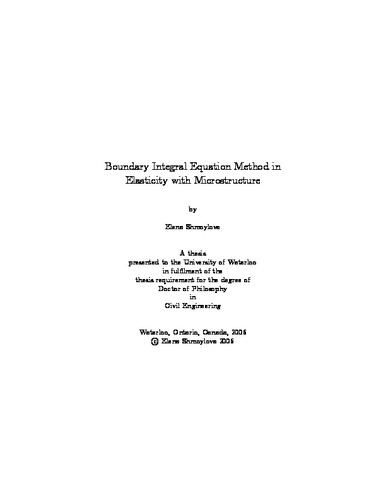 Problems involving mechanical behavior of materials with microstructure are receiving an increasing amount of attention in the literature. First of all, it can be attributed to the fact that a number of recent experiments shows a significant discrepancy between results of the classical theory of elasticity and the actual behavior of materials for which microstructure is known to be significant (e. g. synthetic polymers, human bones). Second, materials, for which microstructure contributes significantly in the overall deformation of a whole body, are becoming more and more important for applications in different areas of modern day mechanics, physics and engineering. <br /><br /> Since the classical theory is not adequate for modeling the elastic behavior of such materials, a new theory, which allows us to incorporate microstructure into a classical model, should be used. <br /><br /> The foundations of a theory allowing to account for the effect of material microstructure were developed in the beginning of the twentieth century and is known as the theory of Cosserat (micropolar, asymmetric) elasticity. For the last forty years significant results have been accomplished leading to a better understanding of processes occurring in Cosserat continuum. In particular, significant progress has been achieved in the investigation of three-dimensional problems of micropolar elasticity, plane and anti-plane problems, bending of micropolar plates. These problems can be effectively solved in a very elegant manner using the boundary integral equation method. <br /><br /> However, the boundary integral equation method imposes significant restrictions on properties of boundaries of domains under consideration. In particular, it requires that the boundary be represented by a twice differentiable curve which makes it impossible to apply the method for domains with reduced boundary smoothness or domains containing cuts or cracks. Therefore, the rigorous treatment of boundary value problems of Cosserat elasticity for domains with irregular boundaries has remained untouched until today. <br /><br /> A mathematically sophisticated, but very effective approach which allows to overcome the difficulty relating to the boundary requirement consists of the formulation of the corresponding boundary value problems in terms of the distributional setting in Sobolev spaces. In this case the appropriate weak solution may be found in terms of the corresponding integral potentials which perfectly works for domains with reduced boundary smoothness. <br /><br /> The objective of this work is to develop such a method that allows us to describe and solve the boundary value problems of plane Cosserat elasticity for domains with non-smooth boundaries and for domains weakened by cracks. We illustrate the method by establishing the analytical solutions for boundary value problems of plane Cosserat elasticity, which plays an important role as a pilot problem for the investigation of more challenging problems of three-dimensional theory of micropolar elasticity. We show that the analytical solutions derived in this work may be successfully approximated numerically using the boundary element method and that these solutions can be extremely important for applications in engineering science. <br /><br /> One of the important applied problems considered herein is the problem of stress distribution around a crack in a human bone. The bone is modeled under assumptions of plane Cosserat elasticity and the solution derived on the basis of the method developed in this dissertation shows that material microstructure does indeed have a significant effect on stress distribution around a crack.