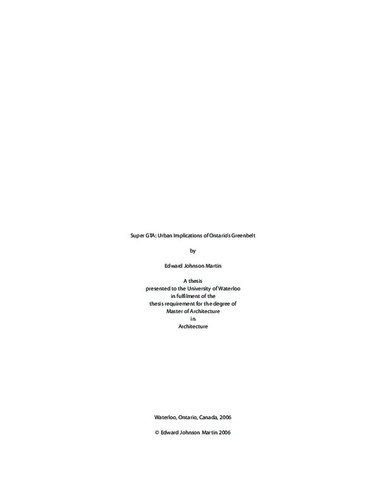 In early 2005, increasing social and infrastructural costs associated with the rapidly expanding Greater Toronto Area [GTA] pressed the Province of Ontario to initiate a growth management strategy for the region. The Provincial <em>Growth Plan</em>, coupled with its <em>Greenbelt Plan</em>, effectively legislates a minimum of 40 per cent infill development by 2015 and limits land supply until 2031. This book explores the extents and implications of this legislation, with a particular focus on the Town of Milton, a key community west of downtown Toronto, where city and Greenbelt meet. <br>    The structure of suburban communities can and should be modified to improve their sense of identity, and reduce their environmental impact and dependency on automobiles. The thesis aims to reflect the policies inherent in the Provincial Growth Plan, which advocates placing walkable infill development in close proximity to public transit. A design proposal links natural corridors and recreational spaces with a public thoroughfare along the existing railway line in Milton, Ontario. A dense new community flanks this public armature which connects the public realm network of this rapidly developing town to the larger network of the Metropolitan Greenbelt. <br>    The Town of Milton becomes a test case for scenarios which are common within the GTA, and examines the human impact on environmental systems moving towards symbiosis. The context of this city-building predicts a fundamental conceptual shift in the priorities of urban living, where residents understand the value of the natural environment and their relationship to it. That is to say, its context is one in which nature matters.