Transforming the Gardiner Expressway: A Vision for Personal Rapid Transit in 2015 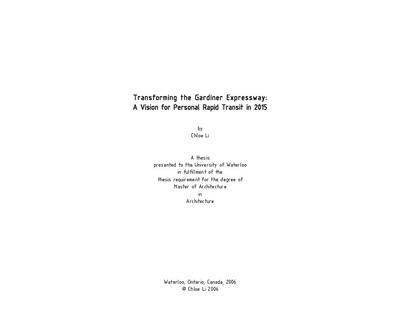 Urban infrastructure has long been regarded as the lifeblood to any city, essential to urban communities. A successful city cannot exist without a successful infrastructure, and as a city matures, its system must adapt. <br /><br /> Modern urban development and, in particular, the proliferation of urban expressways over the past half a century, has led to a greater fragmentation, and even segregation, of certain parts of the city, as well as unprecedented traffic growth that has strained the capacity of urban transportation systems. Cities around the world now confronted by the consequences of urban expressways must begin to rectify their situations. <br /><br /> In Downtown Toronto stands the Gardiner Expressway. Envisioned in the 1950s as part of a larger highway network, resistance to highway planning and growing interest in public transit a decade later left the Gardiner a liability in the urban infrastructure ? well traveled but disjointed, isolated from the waterfront, which is its immediate context, and congested with automobiles. On many levels, it continues to be a detriment to the city as a whole. <br /><br /> This thesis recognizes transportation infrastructure as vital to Toronto's overall development and looks to enhance that development by transforming the Gardiner Expressway into a viable and responsive transit interface, stimulating new, integrated systems of mobility. Conceived within the parameters of Toronto's Official Plan, the project uses a ten-year phasing strategy that involves policy planning, urban transit coordination, and includes the implementation of Personal Rapid Transportation [PRT] technology and a 7. 5 km elevated bicycle path. Seamless movement is achieved by inter-modal transit nodes and direct waterfront access. Bridging the city and the waterfront, the proposed transit initiatives specifically respond at various urban scales to increasing waterfront density, commuting patterns, land uses, and new developments. It is anticipated that the success of this revitalized system will lead other cities to reassess the capabilities of their own urban infrastructures.