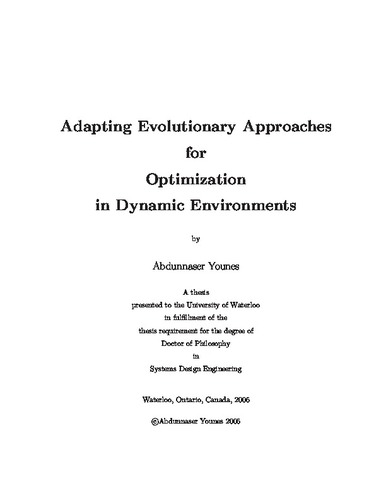 Many important applications in the real world that can be modelled as combinatorial optimization problems are actually dynamic in nature. However, research on dynamic optimization focuses on continuous optimization problems, and rarely targets combinatorial problems. Moreover, dynamic combinatorial problems, when addressed, are typically tackled within an application context. <br /><br /> In this thesis, dynamic combinatorial problems are addressed collectively by adopting an evolutionary based algorithmic approach. On the plus side, their ability to manipulate several solutions at a time, their robustness and their potential for adaptability make evolutionary algorithms a good choice for solving dynamic problems. However, their tendency to converge prematurely, the difficulty in fine-tuning their search and their lack of diversity in tracking optima that shift in dynamic environments are drawbacks in this regard. <br /><br /> Developing general methodologies to tackle these conflicting issues constitutes the main theme of this thesis. First, definitions and measures of algorithm performance are reviewed. Second, methods of benchmark generation are developed under a generalized framework. Finally, methods to improve the ability of evolutionary algorithms to efficiently track optima shifting due to environmental changes are investigated. These methods include adapting genetic parameters to population diversity and environmental changes, the use of multi-populations as an additional means to control diversity, and the incorporation of local search heuristics to fine-tune the search process efficiently. <br /><br /> The methodologies developed for algorithm enhancement and benchmark generation are used to build and test evolutionary models for dynamic versions of the travelling salesman problem and the flexible manufacturing system. Results of experimentation demonstrate that the methods are effective on both problems and hence have a great potential for other dynamic combinatorial problems as well.