Emotion, Perception and Strategy in Conflict Analysis and Resolution 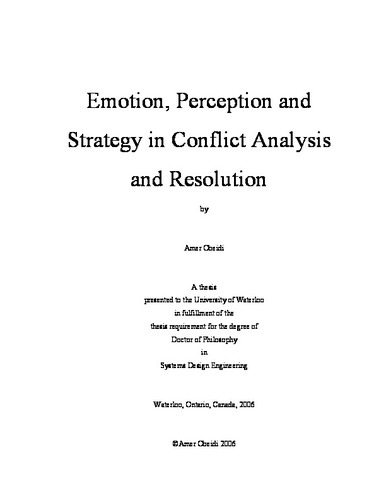 Theoretical procedures are developed to account for the effect of emotion and perception in strategic conflict. The <em>possibility principle</em> facilitates modeling the effects of emotions on future scenarios contemplated by decision makers; <em>perceptual graph models</em> and a <em>graph model system</em> permit the decision makers (DMs) to experience and view the conflict independently; and <em>perceptual stability analysis</em>, which is based on individual- and meta-stability analysis techniques, is employed in analyzing graph model systems when the DMs have inconsistent perceptions. These developments improve the methodology of the Graph Model for Conflict Resolution by reconciling emotion, perception, and strategy to make predictions consistent with the actual unfolding of events. <br /><br /> Current research in neuroscience suggests that emotions are a necessary component of cognitive processes such as memory, attention, and reasoning. The somatic marker hypothesis, for example, holds that feelings are necessary to reasoning, especially during social interactions (Damasio, 1994, 2003). Somatic markers are memories of past emotions: we use them to predict future outcomes. To incorporate the effect of emotion in conflict, the underlying principle of Damasio?s hypothesis is used in developing the possibility principle, which significantly expands the paradigm of the Graph Model for Conflict Resolution of Fang, Hipel, and Kilgour (1993). <br /><br /> State identification is a crucial step in determining future scenarios for DMs. The possibility principle is integrated into the modeling stage of the Graph Model by refining the method of determining feasible states. The possibility principle enables analysts and DMs to include emotion in a conflict model, without sacrificing the parsimonious design of the Graph Model methodology, by focusing attention on two subsets of the set of feasible states: <em>hidden</em> and <em>potential</em> states. Hidden states are logically valid, feasible states that are invisible because of the presence of negative emotions such as anger and fear; potential states are logically valid, feasible states that are invisible because of missing positive emotions. Dissipating negative emotions will make the hidden states visible, while expressing the appropriate positive emotions will make the potential states visible. The possibility principle has been applied to a number of real world conflicts. In all cases, eliminating logically valid states not envisioned by any DM simplifies a conflict model substantially, expedites the analysis, and makes it an intuitive and a realistic description of the DMs' conceptualizations of the conflict. <br /><br /> A fundamental principle of the Graph Model methodology is that all DMs' directed graphs must have the same set of feasible states, which are integrated into a <em>standard</em> graph model. The possibility principle may modify the set of feasible states perceived by each DM according to his or her emotion, making it impossible to construct a single standard graph model. When logically valid states are no longer achievable for one or more DMs due to emotions, the apprehension of conflict becomes inconsistent, and resolution may become difficult to predict. Therefore, reconciling emotion and strategy requires that different apprehensions of the underlying decision problem be permitted, which can be accomplished using a perceptual graph model for each DM. A perceptual graph model inherits its primitive ingredients from a standard graph model, but reflects a DM's emotion and perception with no assumption of complete knowledge of other DMs' perceptions. <br /><br /> Each DM's perceptual graph model constitutes a complete standard graph model. Hence, conclusions drawn from a perceptual graph model provide a limited view of equilibria and predicted resolutions. A graph model system, which consists of a list of DMs' perceptual graph models, is defined to reconcile perceptions while facilitating conclusions that reflect each DM's viewpoint. However, since a DM may or may not be aware that other graph models differ from his or her own, different variants of graph model systems are required to describe conflicts. Each variant of graph model system corresponds to a configuration of awareness, which is a set of ordered combinations of DMs' viewpoints. <br /><br /> Perceptual stability analysis is a new procedure that applies to graph model systems. Its objective is to help an <em>outside</em> analyst predict possible resolutions, and gauge the robustness and sustainability of these predictions. Perceptual stability analysis takes a two-phase approach. In Phase 1, the stability of each state in each perceptual graph model is assessed from the point of view of the owner of the model, for each DM in the model, using standard or perceptual solution concepts, depending on the owner's awareness of others' perceptions. (In this research, only perceptual solution concepts for the 2-decision maker case are developed. ) In Phase 2, meta-stability analysis is employed to consolidate the stability assessments of a state in all perceptual graph models and across all variants of awareness. Distinctive modes of equilibria are defined, which reflect incompatibilities in DMs' perceptions and viewpoints but nonetheless provide important insights into possible resolutions of conflict. <br /><br /> The possibility principle and perceptual stability analysis are integrative techniques that can be used as a basis for empathetically studying the interaction of emotion and reasoning in the context of strategic conflict. In general, these new techniques expand current modeling and analysis capabilities, thereby facilitating realistic, descriptive models without exacting too great a cost in modeling complexity. In particular, these two theoretical advances enhance the applicability of the Graph Model for Conflict Resolution to real-world disputes by integrating emotion and perception, common ingredients in almost all conflicts. <br /><br /> To demonstrate that the new developments are practical, two illustrative applications to real-world conflicts are presented: the US-North Korea conflict and the confrontation between Russia and Chechen Rebels. In both cases, the analysis yields new strategic insights and improved advice.