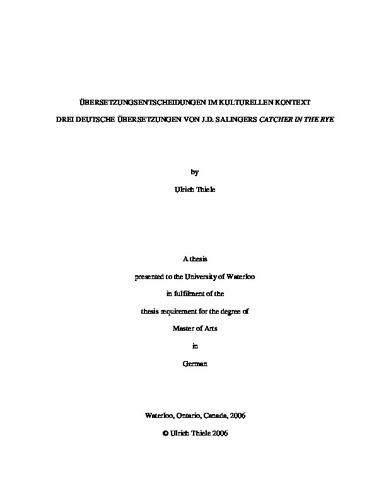 This master's thesis examines the three German translations of J. D. Salinger's novel <em>The Catcher in the Rye</em> (1951): <em>Der Mann im Roggen</em>, published in 1954 by Diana Verlag and translated by Irene Muehlon; <em>Der Fänger im Roggen</em>, published in 1962 and translated by Annemarie and Heinrich Böll, and <em>Der Fänger im Roggen</em>, published in 2003 and translated by Eike Schönfeld (both published by Kiepenheuer & Witsch). In recourse to polysystem theory, it is shown how translational differences can be explained through the translations' cultural and literary contexts. <br /><br /> First, polysystem theory's most important terms are explained in regard to the research objectives. In doing so, the existing research on German translations of Salinger is summarized. Second, with the help of an analysis by Irene Hinrichsen, the latest translation is compared to its predecessors in regard to language and stylistics. This analysis demonstrates that, unlike the earlier translations, Schönfeld's version retains nearly all of the American original's stylistic particularities and extreme content. <br /><br /> Then, building on the result of the linguistic-stylistic analysis, the societal and literary contexts of the three translations are summarized in order to find possible explanations for the translational differences. It becomes clear that the alleviative tendencies of the two earlier translations are very much in tune with the cautious approach to morality of the West Germany of the 1950s. In contrast, the latest translation was produced in a liberal, youthful environment that reflects a more tolerant German society. Therefore, it makes sense to trace the differences between the three translations back to their differing contexts.