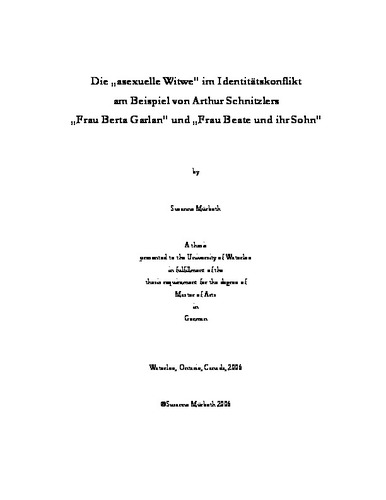 The role of women in society was an important socio?cultural discourse explored in the literature of the late 19th century. The Austrian author Arthur Schnitzler was a key contributor to this discourse. He was well known for the psychological portrayal of his characters and the sexualization of his literary types, especially of his female characters, and in his writings he dared to break societal taboos. Schnitzler created a wide array of social types, such as the "integrated woman," the "ageing spinster," the "woman of the world," the "prostitute" and the widely discussed type the "süße Mädel" ("sweet girl"). In this thesis, however, I will focus on one of the less examined female types in Schnitzler's work: the "widow. " I will examine two narratives by Schnitzler that concentrate on the widow "Frau Berta Garlan" (1901) and "Frau Beate und ihr Sohn" (1913), to investigate this type and to examine the modes of gendered identity?formation as portrayed in the literary texts. <br /><br /> To examine the gender?types that the protagonists reflect in the search for their identity, I will undertake an intratextual analysis of the text, based on the central premises of Michel Foucault's discourse analysis and Judith Butler's analysis of gender as construct. Within this constructivist paradigm of gender and identity, I will undertake a textual analysis of character representation to demonstrate how identity is formed within the constraints of hegemonic discourses, and how resistance against these preformed modes of identity is predicated by fixed notions of social norms. <br /><br /> The texts focus on the lives of the two female protagonists. Both are widowed and fail to break out of the constraints forced upon them by society. With the awakening of their sexual desire, they are caught in an identity crisis, their desires standing at odds with the asexual identity they must assume as widows. In their attempt to combine their sexual desires with their desire to remain respectable in the eyes of society, the widows eventually fail since normative discourses of gender identity do not allow for alternative identities. Although the texts demonstrate the impossibility of living identities that contravene the central tenets of social norm, that the individual is not free to fashion its own identity, Schnitzler's texts also debunk the myth of a natural gender identity and subvert its fatalistic message by demonstrating clearly the constructed character of gender almost a century before the advent of poststructuralist gender?theory.