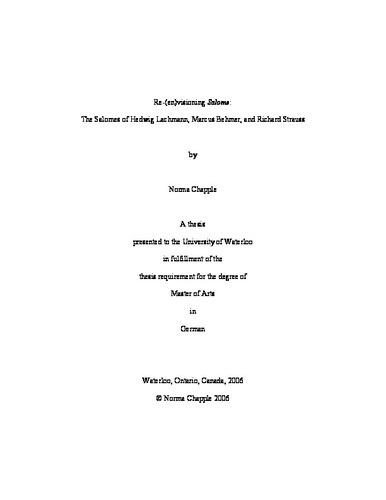 Oscar Wilde overshadows the German reception of <I>Salome</I> (1891), yet his text is a problematic one. Wilde's one-act drama is a mosaic text, influenced by the abundance of literary and artistic treatments of the Salome figure during the <I>fin de siècle</I>. Moreover, Wilde did not write <I>Salome</I> in his native tongue, but rather in French, and allowed it to be edited by a number of French poets. Furthermore, the translation of the text proved problematic, resulting in a flawed English rendering dubiously ascribed to Lord Alfred Douglas. <br /><br /> However, there is a German mediator whose translation of Wilde's play is less problematic than the original. Hedwig Lachmann produced a translation of <I>Salome</I> in 1900 that found success despite having to compete with other German translations. Lachmann's translation alters, expands, and improves on Wilde's French original. In contrast to Wilde's underlexicalised original, Lachmann's translation displays an impressive lexical diversity. <br /><br /> In 1903 Insel Verlag published her translation accompanied by ten illustrations by Marcus Behmer. Behmer's illustrations have been dismissed as being derivative of the works of Aubrey Beardsley, but they speak to Lachmann's version of <I>Salome</I> rather than to Beardsley's or Wilde's. Indeed, the illustrations create their own vision of <I>Salome</I>, recasting the story of a <I>femme fatale</I> into a redemption narrative. <br /><br /> In Germany the play proved quite successful, and Lachmann's translation was staged at Max Reinhardt's Kleines Theater in Berlin. It was here that Richard Strauss saw Lachmann's version of the play performed and adapted it for use as a libretto for his music drama <I>Salome</I>. Despite being adapted from Lachmann's translation, Strauss' music drama is often cited as being based directly on Wilde's play, without mentioning the important role of Lachmann's mediation. Moreover, the libretto is often praised as an exact replica of the play put to music. Neither of these assertions is, indeed, the case. Strauss excised forty percent of the text, altered lines, and changed the gender of one of the characters. <br /><br /> I employ Gérard Genette's theory of transtextuality as it is delineated in <I>Palimpsests</I> (1982) to discuss the interrelatedness of texts and the substantial shift that can occur from subtle changes, or transpositions, of a text. Translation, shift in media, excision, the inclusion of extra-textual features including illustrations, and regendering of characters are all means by which a text can be transformed as Lachmann, Behmer, and Strauss transform <I>Salome</I>. Additionally, I will be using Lorraine Janzen Kooistra's term bitextuality, as described in <I>The Artist as Critic: Bitextuality in Fin de Siècle Illustrated Books</I> (1995) to reinforce Genette's notion that extra-textual elements are also significant to a text as a whole. Finally, I employ Jacques Lacan's theory of gaze as outlined in "Seminar on 'The Purloined Letter'" (1956) and "The Mirror Stage as Formative of the <I>I</I> Function as Revealed in Psychoanalytic Experience" (1949) to discuss the function of gaze within the three texts. <br /><br /> In this thesis, I will be addressing these three German intermedial re-envisionings of <I>Salome</I> and arguing for their uniqueness as three distinct representations of <I>Salome</I>. In this thesis, I will argue that Wilde's text is a problematic precursor and that Hedwig Lachmann's text not only alters, but also improves on the original. Additionally, I will argue that Marcus Behmer's images, while influenced by Beardsley, focus more closely on the text they are illustrating and thus provide a less problematic visual rendering of the play. Finally, I will argue that Strauss' libretto for <I>Salome</I> is mediated through Lachmann's translation and that it is further substantially altered. <br /><br /> In order to show the ways in which the texts differ from one another, I have chosen to focus predominantly on the motifs of the moon and gaze. By analysing the way in which each text represents these motifs it is possible to track changes in characterisation, motivation, and various other salient features of the text.