THE LOCAL HISTORY MUSEUM IN ONTARIO 1851-1985: AN INTELLECTUAL HISTORY 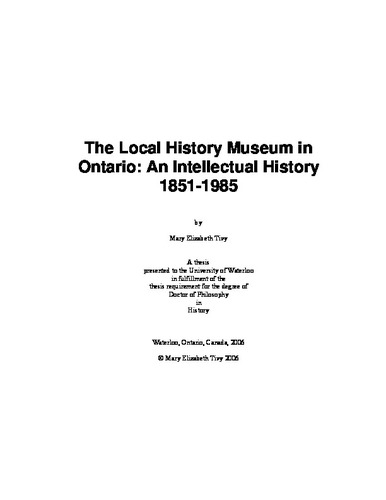 This thesis is a study of the changing model of the local history museum in Ontario, Canada and the consequential changing interpretations of the past in these institutions. <br /><br /> Beginning in 1879, local history museums in Ontario developed largely from the energies of local historical societies bent on collecting the past. While science museums used taxonomy and classification to mirror the natural state of the world, history museums had no equivalent framework for organizing collections as real-world referents. Often organized without apparent design, by the early 20th century a deductive method was used to categorize and display history collections into functional groups based on manufacture and use. <br /><br /> By the mid-twentieth century an inductive approach for interpreting collections in exhibits was promoted to make these objects more meaningful and interesting to museum visitors, and to justify their collection. This approach relied on the recontextualization of the object through two methods: text-based, narrative exhibits; and verisimilitude, the recreation of the historical environment in which the artifact would have been originally used. These exhibit practices became part of the syllabus of history museum work as it professionalized during the mid-twentieth century, almost a full century after the science museum. In Ontario, recontextualizing artifacts eventually dominated the process of recreating the past at museums. Objects were consigned to placement within textual storylines in order to impart accurate meaning. At its most elaborate, artifacts were recontextualized into houses, and buildings into villages, wherein the public could fully immerse themselves in a tableau of the past. Throughout this process, the dynamic of recontextualization to enhance visitor experience subtlety shifted the historical artifact from its previous position in the museum as an autonomous relic of the past, to one subordinate to context. <br /><br /> Although presented as absolute, the narratives and reconstructions formed by these collecting and exhibiting practices were contingent on a multitude of shifting factors, such as accepted museum practice, physical, economic and human resources available to the museum operation, and prevailing beliefs about the past and community identity. This thesis exposes the wider field of museum practice in Ontario community history museums over a century while the case study of Doon Pioneer Village shows in detail the conditional qualities of historical reconstruction in museum exhibits and historical restoration.