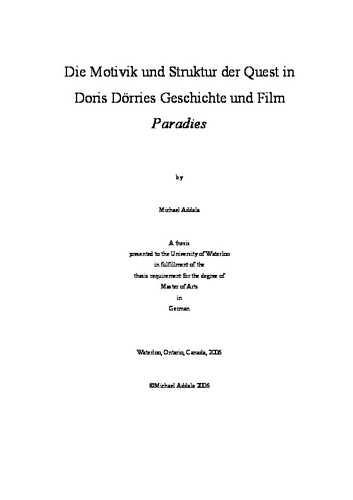 In the thesis at hand I will analyze to what extent Doris Dörrie constructed her story and film <em>Paradies</em> according to the structure of the quest. First of all, some background information will be provided concerning Dörrie's career. After that, a short summary of the important contributions that have been made in the area of the hero's journey and Dörrie's <em>Paradies</em> will be given. Following a depiction of the quest's mythological roots, the Jungian concept of the collective unconscious and its archetypes will be introduced. After that, Joseph Campbell's Monomyth will be explained step by step, for the structural analysis of the action will follow that pattern. The theoretical part will close with a description of the archetypal and mythological method that will be applied to the primary texts. In the practical analysis the theoretical foundation will be utilized to prove that Dörrie's texts are arranged according to the Monomyth. With the help of quotations from the primary works, it will be shown that the plot-device of the quest underlies the relevant story and its adaptation to the screen. <br /><br /> Furthermore, Jung's findings concerning the archetypes will be consulted to find out whether the characters the quester meets correspond to the archetypal roles that the classic seeker encounters. That is why the title includes the word <em>Motivik</em>. Besides that, a connection will be made between the seemingly inappropriate title Paradies and the quest-structure. First of all, the probable reason for Dörrie's choice concerning the title will be ascertained. Highly esteemed philosophers and authors have equated the fall of man with the birth of reason and curiosity. Eve's sin can be interpreted as the start of a quest. The aim of the latter is to return to the Garden of Eden. Furthermore, it will be shown that the hero meets the key archetypes of the shadow, anima and mother, which leads to the finding that the hero's external voyage is above all an internal one. Jakob or Viktor, respectively, is desperately searching for psychological equilibrium ? the archetypal self represented by Lotte. <br /><br /> The major outcome of this thesis will be that both versions of <em>Paradies</em> can be described as modern anti-quests. The reason for that lies in Dörrie's first following the classic pattern only to leave it prematurely in order to manoeuvre her characters into nemesis. Not only the male quest, which is analyzed in detail, but also the two searches of Lotte and Angelika end tragically. The only exception is Lotte's journey in the prose version, which Dörrie only provides incompletely.