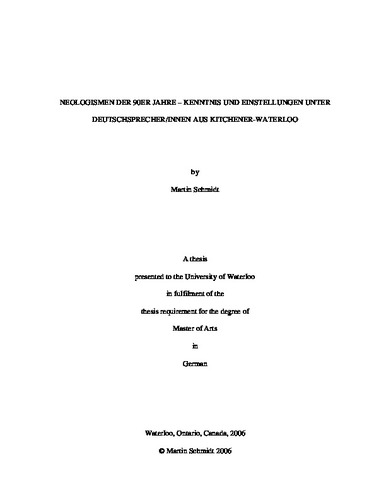 In 2004, the Institut für Deutsche Sprache published the neologism dictionary "Neuer Wortschatz: Neologismen der 90er Jahre im Deutschen", which contains new words that entered the German language during the 1990s (for example "Elchtest" and "Handy"). Based on this dictionary this master's thesis examines to what extent those new words have reached the vocabulary of German speakers in the German language island of Kitchener-Waterloo, Ontario. Moreover, it describes the attitudes of the local speakers of German towards these new words. <br /><br /> First, the term <em>neologism</em> is defined, different types of neologisms are presented and a review of research on German neologisms in general is given. Second, the historical background of the German speakers in Kitchener-Waterloo is described. The focal point of this thesis, however, is on the methodology of the study and on the results of the actual research coming from a data collection amongst German speakers of Kitchener-Waterloo. On the one hand, the focus of the analysis is on the question to what extent this language change in the German language in Europe has reached them. Hence knowledge and usage of the neologisms are examined. On the other hand, the focus is on the attitudes the interviewees have towards these new words. Both aspects are compared to the result of the same study administered to German speakers, who lived during the 1990s in Germany. Hence knowledge and attitudes of the Canadian German speakers can be compared to those of speakers in Germany. <br /><br /> The results show that the participants from Germany knew more neologisms than those from Kitchener Waterloo. Concerning attitudes, both groups showed a slightly positive attitude towards the neologisms with interesting differences regarding certain types of neologisms.